Tyre continues down its own road 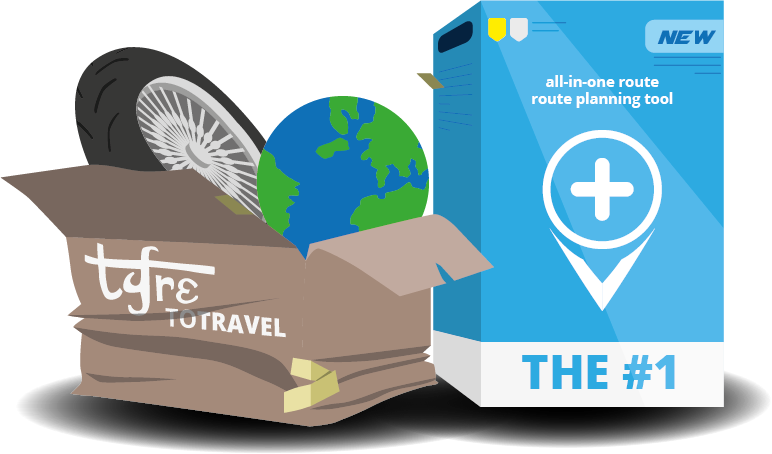 It all started in 2006 when Jan Boersma combined his hobbies, motorcycling and programming. He created the Tyre route software. Tyre has continued to evolve and without much advertising has become the most famous free program for creating GPS routes. More than 500,000 people worldwide have used it since then. The hobby got out of hand, Michel van Hagen joined in 2012 and founded TyreToTravel, supporting Jan with the business and commercial aspects of Tyre.

This collaboration was successful for a long time, but due to developments in the market, Michel shifted the focus to so-called 'cloud-based' route planning, leading to the MyRoute app. After joint consultation, Michel and Jan have now concluded that it is no longer possible to exploit Tyre as a commercial product. As a result, the roads part for these two route planning pioneers. Jan continues with Tyre, Michel and his team focus on the MyRoute-app.

Tyre is therefore free again (also the Pro version), but will need some time for technical adjustments to optimise the map licenses (read: keep free). In the first phase, the user will have to request their own so-called Google API. In practice, that is free, but it's still an unwanted barrier. The top priority is to remove that barrier.

MyRoute-app is free in the basic version and has many options. But the real power for the enthusiast is the paid version (30 euros per year). That 'Gold' version contains, in addition to many other extra options, also the license for Here (Garmin), TomTom and Google Maps. It is precisely this that offers the user significant advantages over the free route planners.

All in all, the development is largely caused by the changes in the market and the costs of map licenses.

Tyre goes back to basics, with only one ambition: building fun things from the hobby that many people enjoy. With a focus on simplicity. Tyre does not charge for this, but donations are more than welcome.

The ambition of MyRoute-app is to be the number 1 route platform. Whether we're talking about Garmin, TomTom or smartphone. With not only a powerful route planner with all maps, but also a community and extensive routeXpert database. These broad options are expensive in terms of licenses; we ask for a fixed contribution per year for the extra functions, the basic subscription is and will remain free.

Switch over and receive a 40% discount

MyRoute-app has never before given away a 40% discount and MyRoute-app is not planning that for the future. This huge discount is temporary, exclusive for (ex) Tyre users, and will therefore not be back, so be quick.

Switch immediately and receive a 40% discount

Assistance with switching over

If you click on the button below, you will be redirected to a new page with six short videos waiting just for you. After viewing them you will have a good explanation of MyRoute-app possibilities. Would you like some more guidance? MyRoute-app has also considered this, just take a look…

Assistance with switching over