From the Woerthersee through the Rosental and Jauntal to the Austrian-Slovenian border to Lavamünd. Via Soboth, which is very popular with motorcyclists, we go to Styria and through the white wine growing areas via Hebalpe back to Carinthia. The crossing of the Saualpeer follows the Klippitztoerl and over the Krappfeld and the customs field one reaches past historical Carinthian monuments again to Klagenfurt and to the Woerthersee.

Schilcher Weinstraße
The ninth tour in a series of 12 most beautiful routes motorcycle country Carinthia and falls under the category "medium" (Austria uses "easy, medium and difficult"). Beautiful winding roads in beautiful nature but there are also more city streets with more traffic, so I give the tour 4 and half *. Plenty of possible stops on the way with beautiful views or to eat or drink. (In order to balance the route for the TT, additional route points were sometimes added.)

Culture and wine enjoyment at Wörthersee and Schilcher Weinstraße ...
From Velden it goes along the southern shore along the largest and most famous "bathtub" of Carinthia, the Wörthersee, and after a few kilometers you reach Maria Wörth (RP 3 at the crossroads left) with the famous peninsula and church. Continue on Reifnitz to Klagenfurt, where you turn onto the Südring. The B91 leads to Ferlach in the tranquil Rosental and follows the B85 to the east. A short ascent up to the abbey gives the first curve feeling and at the end of this little pass you can visit the Wildensteiner waterfall in Gallizien - pass the RP 7 at the next intersection. Continue via Sittersdorf to Bleiburg, known as the birthplace of the artist Kiki Kogelnik. At Aich you can take a look at the Jauntalbrücke, one of the highest railway bridges in Europe, from where daring bungy jumping can be experienced (view RP 9). At Lavamünd, it then goes on a beautiful, winding road up to the Soboth (1,349 m), again and again through forests and many open trails - scenically phenomenal. Photo moment RP 10, possible kaffeehalt Reservoir Soboth RP 11.
From here you are in Styria. The numerous winegrowing areas can not be overlooked, from Eibiswald to Deutschlandsberg the path leads along the Schilcher Wine Route, named after the typical Rosè wine for this region. Continue on a perfectly developed road from Deutschlandsberg to the Hebalm (1,380 m) RP 14 with a possible stop at the Rehbock hut. Via Preitenegg it goes back to Carinthia. At Bad St. Leonhard turn off to Klippitztörl, the highest point of this tour with 1,644 m. Carinthia's most spectacular summer toboggan run on RP 16.
Next follows a long descent in the Görtschitztal and Guttaring it goes in a southern direction through the Krappfeld, the "granary" of Carinthia. Man passes the castle Hochosterwitz at Launsdorf (RP 18) and via St. Donat you come to the Zollfeld, where a detour to the Magdalensberg is very worthwhile RP 20. Via Maria Saal (dome past RP 24 right) it goes to Klagenfurt and thus back to the Wörthersee.

* Summer toboggan run RP 16: The ride goes on a varied route with steep curves, bridges, underpass .... You can negotiate 1,400 meters in length and 260 meters in altitude and reach speeds of up to 40 km / h. That means thrill and high speed with complete security. The chairlift will bring you comfortably on the summit of the Hohenwart at 1818m back to your motorcycle.

** The Krappfeld is a valley plain of the Gurk in the Austrian province of Carinthia. It extends from the municipality of Althofen in the north, located about 660 m above sea level, to the village of Passering (municipality of Kappel am Krappfeld) in the south, from where the river flows southwards, the Rudolfsbahn line and a country road at about 550 m above sea level run the narrow valley. The Friesacher Straße (B 317) runs along the western edge of the Krappfeld. The Krappfeld was already relatively densely populated in the times of the Celts and Romans, the fertile soil was and is used in particular for the cultivation of grain and fruit; The Krappfeld is therefore also called the "granary of Carinthia". Historically, the Krappfeld, which belonged to the county Friesach, long owned by the Archdiocese of Salzburg. Since the middle of the 12th century there was a district court Krappfeld based in Althofen. 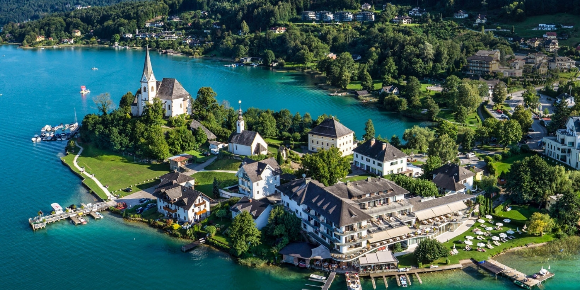 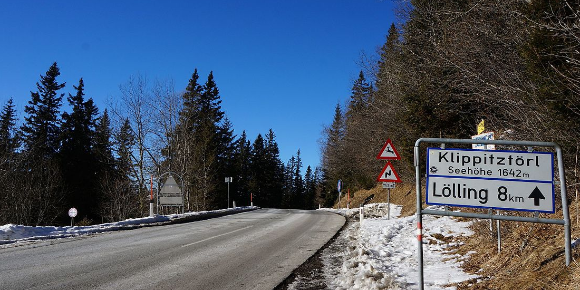 Use route
Share
Stiermarken
The images and text displayed here originate from the Wikipedia article "Stiermarken", which is released under the Creative Commons Attribution-Share-Alike License 3.0.
About this region
Below is list of Dutch language exonyms for places in non-Dutch-speaking areas of Europe