Countries in this route
Route by Hans v.d. Ven (MRA-Master)
Published: 03/01/2021
The 49th route of THE tour through Australia, you can start or end this tour in any major city, such as Adelaide, Brisbane, Cairns, Darwin, Melbourne, Perth & Sydney. It takes a while to get to Australia, but the long journey to this beautiful country will certainly be rewarded. You can ride a motorcycle in Australia.

Silo Art Trail
This route is dedicated to the "Silo Art Trail". The Silo Art Trail is Australia's largest open-air gallery. The route along the silos extends for a length of 200 kilometers and connects Brim with neighboring towns of Lascelles, Patchewollock, Rosebery, Rupanyup and Sheep Hills.

The route provides an insight into the true spirit of the Wimmera Mallee, the Wimmera is a region in the state of Victoria covering the arid farming area, recognizing and celebrating the people of the region through a series of large-scale mural portraits painted on grain silos, many of which date back to the 1930s. The project saw a team of renowned artists from Australia and around the world visit the region, meet the locals and transform each grain silo into an epic work of art; each with a unique story about the host city.
The Silo Art Trail was conceived in 2016 after the success of the first silo artwork in Brim. What started as a small community project of the Brim Active Community Group, GrainCorp, Juddy Roller and artist, Guido van Helten, resulted in widespread international media attention and an influx of visitors to the region and the idea for the "Trail" was born.
The Silo Art Trail originated as a collaboration between Yarriambiack Shire Council, international street art agency Juddy Roller, Victorian Government, Australian Government and GrainCorp, who donated the silos as a canvas for the artists' work.

You can refuel in this route in Sea Lake, after 115 KM, you can also, if you go off the route, make a coffee stop in the town. The next opportunity to refuel, after 300 KM, is in Beulah, here too, if you deviate from the route, you can stop for something to eat and / or drink. And of course you can also refuel in Horsham, just before you get to the end point.

This 4-star rated route follows mostly very good roads, along 8 painted Silos. Be careful, because the wind can be strong in this area.

General info:
Victoria is the smallest state on the Australian mainland. It is located in the southeastern corner of the continent and has a population of over 6.5 million on an area of ​​227,416 km². The border with New South Wales is the south bank of the River Murray. It borders South Australia to the west and the Indian Ocean to the south. Brass Strait lies between Victoria and Tasmania. Victoria, like Queensland, is named after Queen Victoria.

There are wide variations in climate in Victoria, from the moderately humid eastern Gippsland to the snow-capped, nearly 2000 meter high Australian Alps in the northeast, and from the hot semi-desert of the northwest to the lush irrigation areas along the Murray. Mount Bogong is the highest mountain in Victoria.
Gold was found near Raspberry Creek in Victoria in the 19th century. This gold was of very high quality. Hamlets were founded along the brook. The hamlet of A1 Mine Settlement takes its name from this period.

History
The area was already inhabited when the first Anglo-Australians settled there in 1803. In 1835 John Batman bought from the native population an area on which the city of Melbourne was to be built. In 1851 the area was detached from New South Wales and in 1855 it was given the status of a self-governing colony. A parliament consisting of two chambers was elected. The first Prime Minister was William Haines. In 1901, the six Australian colonies formed the Commonwealth of Australia, and Victoria has been a constituent state of that country ever since. 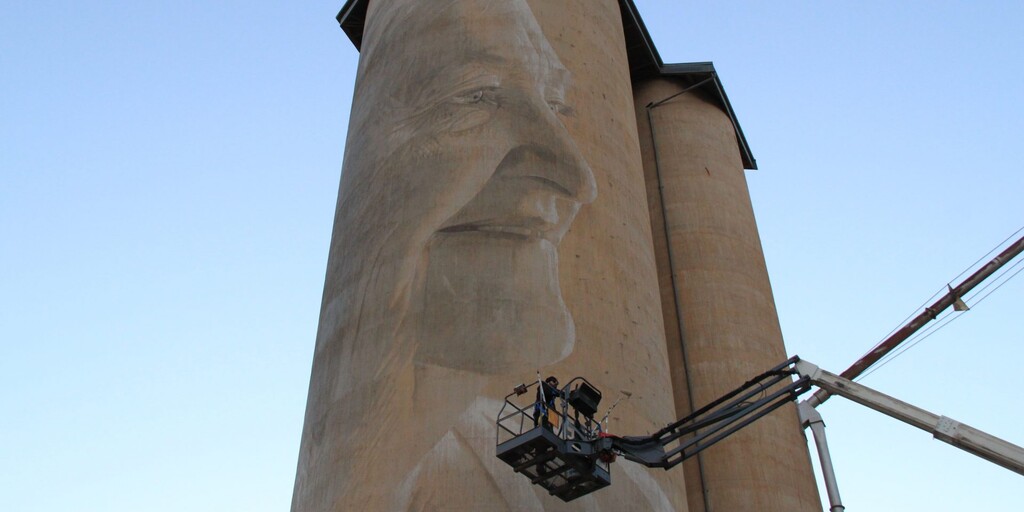 Working on the Lascelles Silo Art 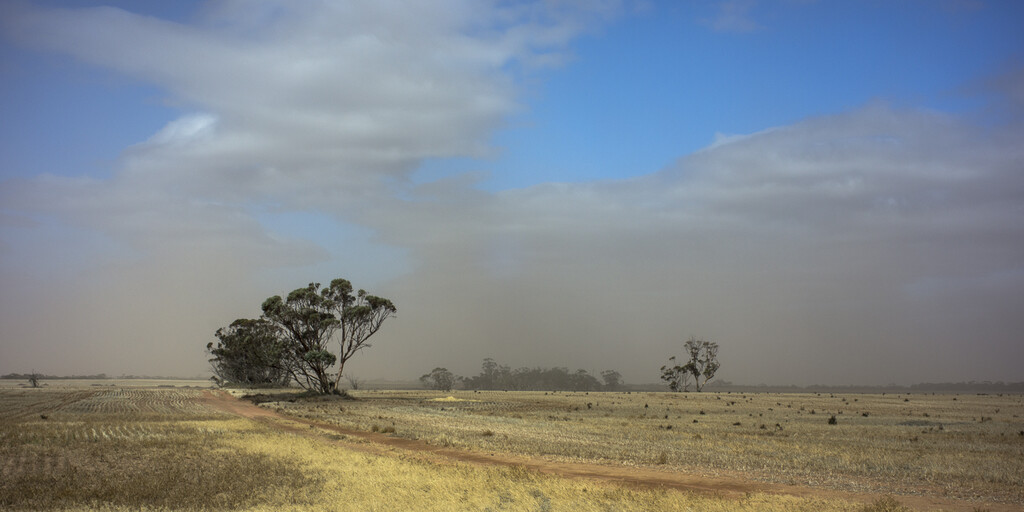 Mallee Ouyen duststorm
Useful links:
Horsham, Horsham House Motor Inn
Silo Art Trail
Apply for Permits to travel through certain parts of Aboriginal land.
Info if you are going to travel by motorcycle through the Australian Outback.
Info about roads, road use and traffic rules in Australia.