Countries in this route
Route by Hans v.d. Ven (MRA-Master)
Published: 16/01/2021
The 51st route of THE tour through Australia, you can start or end this tour in any major city, such as Adelaide, Brisbane, Cairns, Darwin, Melbourne, Perth & Sydney. It takes a while to get to Australia, but the long journey to this beautiful country will certainly be rewarded. You can ride a motorcycle in Australia.

Great Ocean Road
This route takes you to Lavers Hill, the highest point on the Great Ocean Road. After leaving Dartmoor you drive between the Lower Glenelg National Park and the Cobboboonee National Park, this National Park is 18,510 hectares. Before it was declared a national park, the area was the Cobboboonee State Forest. The Lower Glenelg National Park lies to the west of the park and the Fitzroy River arises from the swamps in the park. The Gunditjmara people are the traditional owners of this area with the national park.
Once in Portland, you can choose to stop for a drink at one of the options along the route. After Portland, keep following the coastline to arrive in Port Fairy. This charming fishing village features wide streets lined with 19th century cottages, tall Norfolk pines and old stone churches. Reason enough to take a look around and possibly do some shopping, so you can have a picnic further along the route at the Tower Hill Rest Area. After the stop on Tower Hill, the next town, Warrnambool, looms up. This is a somewhat larger city, so again enough choice to stop for something to eat and / or drink along the route. After Warrnambool, turn right onto Great Ocean Road.

The Great Ocean Road is a 150-mile (243 km) road between the towns of Torquay (to the east) and Allansford at Warrnambool (to the west). Construction was started in 1919 by soldiers returning from the First World War (1914-1918). They built it until 1932. The Great Ocean Road was dedicated to the victims of the war and as a result is the largest war memorial for victims of the First World War.
As the road takes you past various sights, beautiful coastlines and beautiful landscapes, the Great Ocean Road has also become a tourist attraction in its own right. Larger villages on the road are Anglesea, Lorne, Apollo Bay and Port Campbell. The part east of Cape Otway is called the Surf Coast, and the part west of it is known as the Shipwreck Coast. The latter part leads through the Port Campbell National Park, with spectacular natural limestone and sandstone rock formations such as Loch Ard Gorge (after the ship that was lost there, which was named after the lake of the same name in Scotland;
The Grotto (a sinkhole combination of blowhole, arch and cave); London Arch (before the 'bridge' collapsed into the sea London Bridge); The Gibson Steps, and The Twelve Apostles.
The entire coast has been formed by the sea, which has also carved out these special formations.
Koalas are found in the vicinity of the Great Ocean Road. Whales also migrate along the coast every year. Warrnambool in particular is known for this.

This 4-star rated route has mostly very good roads, and along many beautiful sights, where you will regularly stop to take some pictures.

General info:
Victoria is the smallest state on the Australian mainland. It is located in the southeastern corner of the continent and has a population of over 6.5 million in an area of 227,416 km². The border with New South Wales is the south bank of the River Murray. It borders South Australia to the west and the Indian Ocean to the south. Brass Strait lies between Victoria and Tasmania. Victoria, like Queensland, is named after Queen Victoria.

There are wide variations in climate in Victoria, from the moderately humid eastern Gippsland to the snow-capped, nearly 2000 meter high Australian Alps in the northeast, and from the hot semi-desert of the northwest to the lush irrigation areas along the Murray. Mount Bogong is the highest mountain in Victoria.
Gold was found near Raspberry Creek in Victoria in the 19th century. This gold was of very high quality. Hamlets were founded along the brook. The hamlet of A1 Mine Settlement takes its name from this period. 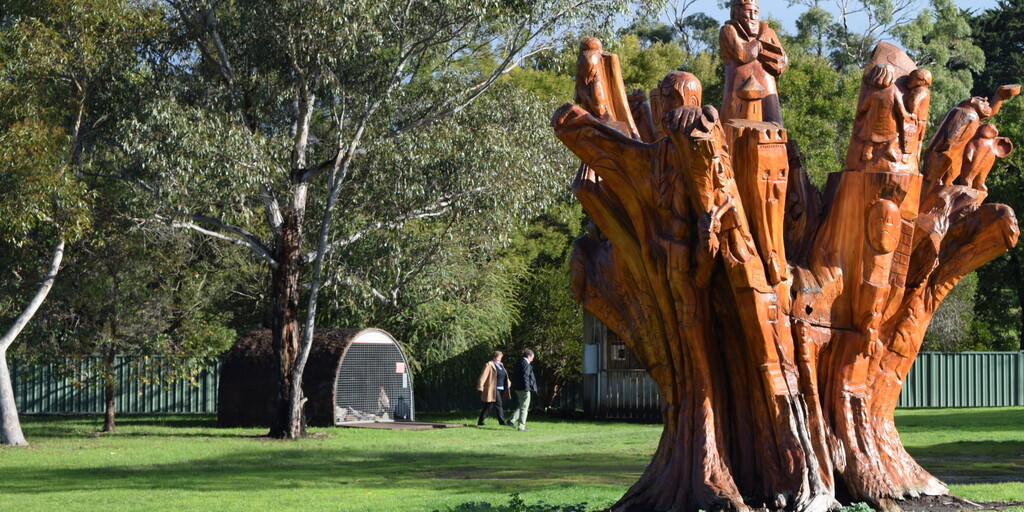 Lavers Hill
Useful links:
Apply for Permits to travel through certain parts of Aboriginal land.
Info if you are going to travel by motorcycle through the Australian Outback.
Info about roads, road use and traffic rules in Australia.
Lavers Hill, Otway Junction Motor Inn
Info Great Ocean Road