Countries in this route
Route by Arno van Lochem - RouteXpert
The Alps, a mountain range in Europe that stretches from the French Mediterranean coast in the southwest to the Pannonian plain in the east, almost always guarantee beautiful routes. It can hardly be boring there. The many passes, vistas and variations in the landscape make the Alps a true motorcycle paradise.

The start of this route is at the loading bay of the OEBB, the Östereiche Bahn. From this point you immediately enter the motorcycle rider's paradise: The Alps.
This route includes the Umbrail and Stelvio pass, two wonderful passes in the Alps.
The end point is in Chiuro, Italy at a lovely hotel / pizzeria.

The route is for the more advanced motorcyclist. Certainly the Stelviopas requires good motor control, given the many (tight!) Hairpin bends.

Stelviopas
Driving around in the Alps is quite an experience. You have not yet passed the first turn or the next one is already coming. Climbing the landscape from the valley to see changing from wooded slopes with splashing waterfalls to alpine pastures where no tree can be found and asphalt roads that cut through the eternal snow. On top of the mountain, enjoy phenomenal views of the surrounding snowy peaks, as if you were standing on the roof of the world. For me that is pure enjoyment and that is why I rate this route with 5 stars.

The route starts in Innsbrück at the loading bay of the OEBB. There are daily car trains from Düsseldorf that have this place in the south of Austria as the end point. You can also reserve a place for the motorbike on this night train. Leave in the evening and arrive late the next morning. For more information see the link below.

In Innsbruck, the route comes almost directly past a petrol station. The gasoline prices in Austria are quite lower than in the Netherlands, so it is wise to refuel here.

Despite the fact that Innsbruck is a fairly large city with 130,000 inhabitants, after 3 kilometers you are already out of built-up areas. On the left and right you can already see the hilltops looming, that promises something! And indeed, at Kematen in Tirol you turn onto the L13. This road winds along a river, the Melach. Beautiful curves and steep cliffs alternate.

Once you have arrived on the L63, you drive along the viewing platform Gache Blick. This platform at 1,559 m above sea level offers a breathtaking view of the Inn Valley and the surrounding mountain ranges. In good weather you can see for miles.
A small warning is appropriate if you are afraid of heights. The platform still hangs a few meters above the ground, the 'floor' consisting of steel grids.
In the restaurant Gauchenblick there is a continuous exhibition called '3000m Vertikal'. This exhibition brings the visitor closer to the natural features of the natural park. An interactive walk through the different habitats - from the eternal ice to the dry steppe slopes in the valley - opens up interesting perspectives on plants, animals and people in the natural park. In addition, a film takes you back to a bygone era. The exhibition is open all day from Mon-Sun 10 am-6pm.

Leave the L63 at Kauns and continue on Reschen Bundesstraße. You will reach Lake Reschen via the Finstermünz Pass and Nauders. The Reschenmeer is a reservoir at about 1520 meters above sea level, just over the Austrian-Italian border, close to the Reschenpass. The lake is six kilometers long and is one kilometer wide in the widest places.
The reservoir was created in 1950 after the construction of a dam between 1948 and 1950. Before the dam was built, three more lakes could be found. Next to the Reschenmeer were the Mittersee and the nearby Haidermeer, which is located south of the Reschenmeer.
As a result of the dam, the original village of Graun and much of Reschen were flooded. 163 houses were demolished and 523 hectares of land were flooded. Today the church tower of Alt-Graun, the old village center of Graun, protruding above the surface reminds of the former village.

The route continues towards Switzerland and at Tubre the Italian-Swiss border is passed. Shortly after that, turn left onto the Umbrail Pass. A height of 2503m is indicated for this pass, however the official height is 2501m, due to corrections to the height determination by the Swiss authorities. In earlier times the Umbrailpass formed the connection between the Val Venosta (Vinschau) and the Valtellina. The current road was built in 1901. Only the last few years, the entire pass has been paved, previously several kilometers still consisted of gravel roads.
Due to heavy snowfall at the pass height, the road over the Umbrail Pass is closed to traffic from October to May every year.

On top of the Umbrail Pass, the border with Italy is crossed again and you arrive at the Stelvio Pass. The route keeps left and goes to the highest point of this 2758 meter high pass. Construction of this pass began in 1822. Barely three years later, the road was completed. Over the years, the pass has been adjusted in various places, in some places you can still see the old road.
Until 1915, the Stelvio Pass was ridden all year round by coaches. During the winter the road was kept passable by snow shovels. In 2020, however, the pass is closed to traffic from late October to early May.
On top, at an altitude of more than 2750 meters, you have - especially in good weather - a heck of a view. Take a moment to walk around here and check out the Tibet Hütt, an eatery built in the style of its name. Also from this point a great view over the shops on top of the pass and, even better, the descent towards Prato.

The descent of the Stelvio Pass is one that you will not soon forget. From the top to Bormio it is 20 km downhill! RP15 is a point where you have a beautiful view over the valley in the direction of Bormio. From this point you can follow the course of the Stelvio Pass for a few kilometers, really worth a stop.

After the Stelvio Pass the route winds further and after several hairpin bends and for example the Forcola di Livigno (2315m) the route in Brusio runs along the Viadotto elicoidale, or the spiral viaduct. Built in 1908, this viaduct is part of the Bernina railway section between Brusio and Campascio. During the construction of this railway, the engineers decided that the route should adapt to the natural landscape, avoiding unnecessary complexity. The spiral viaduct was - just like in many places in mountainous areas - the solution to meet all wishes, including bridging larger height differences at short distances. In the mountains, these types of buildings are usually poor or impossible to visit, but here the viaduct is beautifully visible.

After exiting the spiral viaduct, you will cross the Swiss-Italian border one more time to finally reach today's final destination in Chiuro after 300km of climbing and descending.

Have fun on this route! 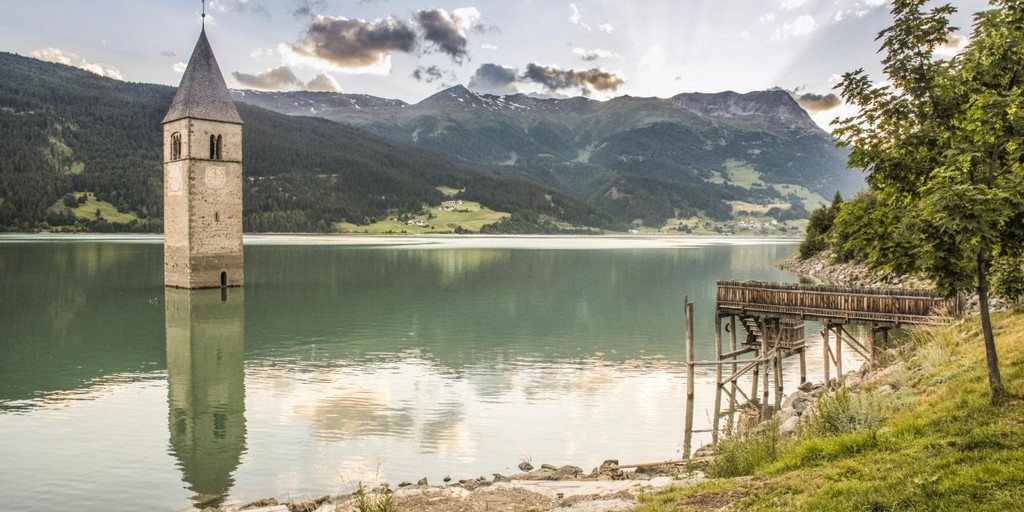 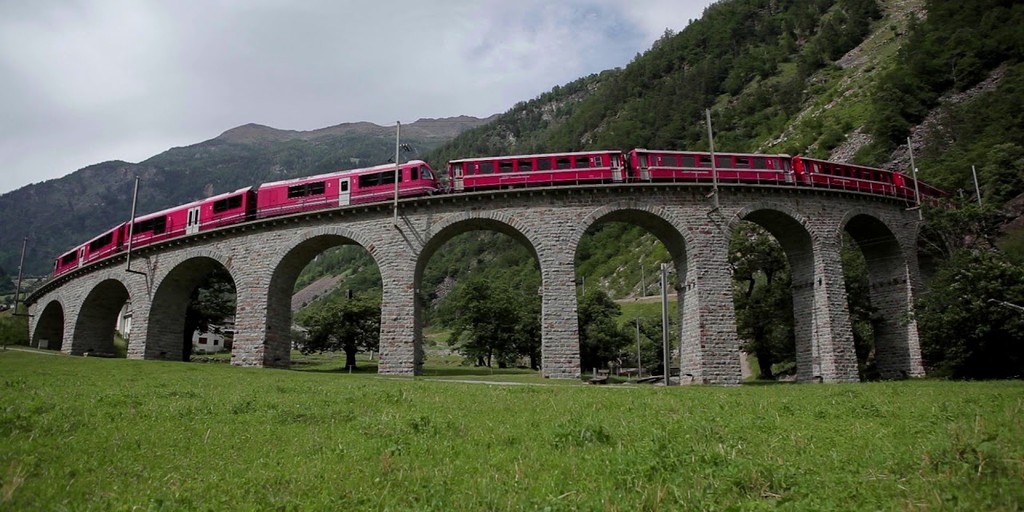 Tirol
The images and text displayed here originate from the Wikipedia article "Tirol", which is released under the Creative Commons Attribution-Share-Alike License 3.0.
About this region
Tyrol (; historically the Tyrole; German: Tirol German pronunciation: [tiˈʁoːl]; Italian: Tirolo) is a historical region in the Alps—in Northern Italy and western Austria. The area was historically the core of the County of Tyrol, part of the Holy Roman Empire, Austrian Empire and Austria-Hungary, from its formation in the 12th century until 1919. In 1919, following World War I and dissolution of Austria-Hungary, it was divided into two modern administrative parts through the Treaty of Saint-Germain-en-Laye: State of Tyrol: formed through the merger of North and East Tyrol, as part of Austria Region of Trentino-Alto Adige: at that time still with Souramont (Cortina d'Ampezzo, Livinallongo del Col di Lana and Colle Santa Lucia) and the municipalities Valvestino, Magasa and Pedemonte, seized in 1918 by the Kingdom of Italy, and thus since 1946 part of the Italian Republic.With the founding of the European region Tyrol-South Tyrol-Trentino the area has its own legal entity since 2011 in the form of a European Grouping for Territorial Cooperation.

42.88
Hours
View route collection Tour around Switzerland
About this route collection
The Alps, a mountain range in Europe stretching from the French Mediterranean coast in the southwest to the Pannonian plain in the east, almost always guarantee beautiful routes. It can hardly be boring there. The many passes, views and variations in the landscape make the Alps a true motorcycle paradise.
Switzerland is central to this paradise and is surrounded on all sides by countries where it is beautiful steering on fantastic roads.
The 7 routes of this collection lead you around Switzerland, of course this beautiful country itself is also visited. You will pass through beautiful areas such as the Alps, the French and Swiss Jura and the Black Forest.

A few attractions are discussed per route in the review. These often tell something about the history of the area in which you are driving. So educational. Many places have also been indicated where you can find some entertainment, such as a toboggan run. You are completely free to visit these sights, you can of course also determine your own interesting points.
But the most important thing you've probably traveled to this area for is simply driving. And as mentioned above, you are in a true motorcycle paradise where the steering is fantastic!

Each route ends at a hotel (except the last one which ends at the train station in Innsbruck). It is of course not an obligation to use these hotels, you can always find another place to stay in the area, you are completely free. However, my experience is that they are all simple but good hotels for a very reasonable price. They are known and can be booked via booking.com.

The routes of these collections:

Have fun riding these routes!