Countries in this route
Route by Leonor Orban - RouteXpert
Published: 29/12/2019
I rode this route in June 2018, together with my partner. The route is part of a 3-week holiday through Eastern Europe and takes you from Hinterhermsdorf via small roads through Sachsen and Northern Bohemia to Oberwiesenthal in Germany.

During the ride you will come across a number of interesting sights, such as the famous Königstein Castle, Lauenstein Castle, the Fláje Dam and the Preβnitztalbahn.

Along the way there are also plenty of opportunities to take a break and take photos.

Keep in mind that during the second half of the route, the road surface in the Czech Republic keeps getting worse. In the extensive review I describe an alternative route if you want to avoid the worst part.

The route has been made the same for Garmin, TomTom and MyRoute-app Navigation.

"Thick" forests of North-Bohemia
This ride is part of a journey that lasts approximately 3 weeks. In June 2018 I visited Poland, Slovakia and the Czech Republic with my partner. This is the tenth ride of this vacation.

Today we drive a bit towards the West. We leave the Sachsische Schweiz National Park via the Kirnitzschtalstraße. Take your time for this road. It is wonderful to ride curves along the impressive rocks, trees and the stream. Also keep in mind that the Kirnitztalbahn tram can drive you.

Once arrived in Bad Schandau you can refuel at the Aral (see instructions at RP2) and then continue your way towards the Königstein Castle. This castle served various purposes, ranging from a monastery to a state prison. The first mention of the building dates back to the year 1230. It was once founded as a castle for a noble family, after which it became a monastery in the 16th century. A well (152 meters deep) was also built during this period, which led to the building being transformed into a castle at the end of the 16th century. Partly due to the continuous access to water, the residents of the castle were able to protect themselves from the outside world for a longer period of time. The castle was impossible to storm, but also almost impossible to break out. As a result, the castle started serving as a prison around the 20th century. Between the wars it served as a hospital and after the Second World War, Königstein Castle took its current form: military and historical museum. There is also a restoration where you can have a drink or snack if you feel like it.

RP3 gives instructions where you can park. You can also rent lockers at this parking house to safely store your helmet and jacket, so that you can look around the castle at your leisure without having to carry all your stuff with you.

After this cultural trip you continue your route further to the West. The curves are wonderfully sloping and not too difficult, so you can also enjoy the surroundings well. Eventually you arrive about 45 minutes later in the village of Lauenstein with the castle of the same name.

Compared to Königstein Castle, this castle is "just" a modest castle. Lauenstein Castle dates from the same period as Königstein Castle, but has always served as a "palace" for the nobility. Where Königstein Castle was increasingly functionally developed, Lauenstein paid particular attention to the construction of a magnificent Renaissance castle. You can also see this splendor in the accompanying castle garden. Nowadays you can visit the garden and the castle. The Museum of the Eastern Ore Mountains is also housed here.

After about 15 kilometers from Lauenstein you will cross the border into the Czech Republic. You are in northern Bohemia, where you pass the Fláje dam along the way. If you have not driven the "Sachsische Schweiz Westelijkezijde" tour, this place is new to you and worth stopping for a photo of the dam. If you have time and you find large constructions and technology interesting, it is worthwhile to view the dam from the inside. At the information center you can learn more about the tours.

The part of the Czech Republic that you are now going through is often densely forested. The roads swing over the mountains, with an occasional hairpin ride. You will see that here and there some small ski areas can be found. At the ski area of Klíny you can take a break at Hotel Emeran. At the hotel they also know how to get off the sommerrodelbahn. This is just behind the hotel and is a nice way to speed up in a different way!

The route then continues winding its way through the nature reserves of northern Bohemia. Shortly you make a trip across the border to Germany. From the village of Steinbach to Jöhstadt you will notice that you regularly see a narrow railway along the road. This is the still existing part of the Preβnitztalbahn. This narrow gauge track was built at the end of the 19th century with the aim of importing brown coal from the Czech Republic. In the end, they never succeeded and the narrow-gauge track served to transport people and goods for the local industry in the region. In the 1980s, the narrow gauge railway was disregarded by the GDR, but after the fall of communism, a foundation was set up to open part of the route as a museum. Nowadays you can admire the steam locomotives and ride a part along the route between Jöhstadt and Steinbach. At Jöhstadt (RP12) you can park your motorcycle and visit the museum.

From Jöhstadt the Oberwiesenthal terminus is just around the corner. It is only a short drive through the Czech Republic. The route leads you to the next village: Bärenstein. Here you can continue the route and drive through the forests of northern Bohemia in the Czech Republic for a nice part. Personally I like this part, because they are narrow roads through "thick" forests where you have to keep your attention while driving. You will sometimes come across holes in the road! If you don't feel like doing this at the end of the day, you can deviate from the route at RP13 by not turning left along the route onto Grenzstrasse, but by turning a street further, turn left at the T-junction on the B95. This main road in Germany leads you directly to Oberwiesenthal and the end point of the route (Hotel Alpina Lodge Oberwiesenthal).

This large hotel has excellent facilities for a good overnight stay, the safe storage of your motorcycle and offers good meals. Oberwiesenthal is a spa town, where skiing is also possible in winter. Because of this there are sufficient accommodation options if you want to move to another location.

The route gets 3.5 stars from me. It is certainly worth the effort to drive, but because the route is meant to go a lot further "towards home", technically no challenging roads have been included in the route. It is above all a simple route to be able to drive at ease and to record the surroundings and any sights along the way. In addition, you must bear in mind that the roads in this route in the Czech Republic can regularly be of poorer quality, so that you have to keep your attention on the road. 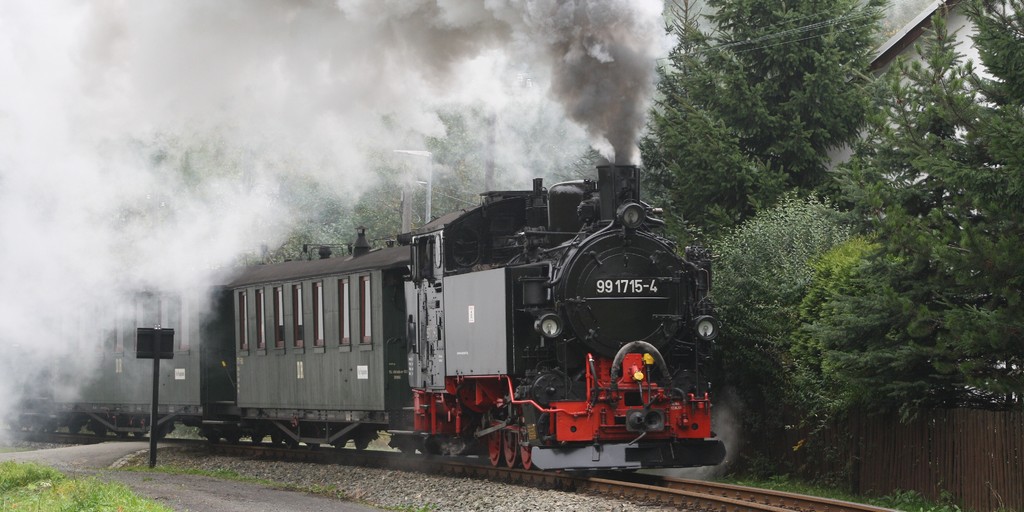 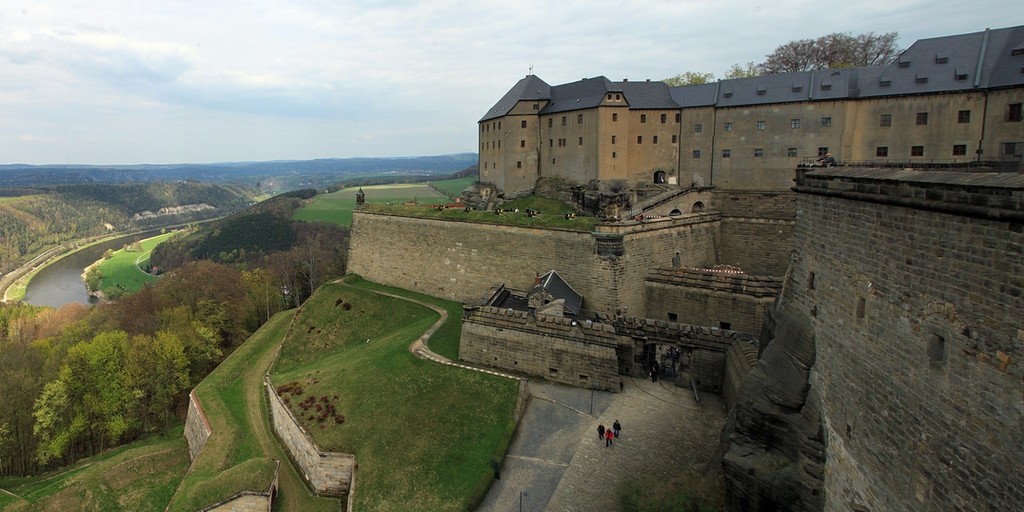 Karlovy Vary
The images and text displayed here originate from the Wikipedia article "Karlovy Vary", which is released under the Creative Commons Attribution-Share-Alike License 3.0.
About this region
Karlovy Vary (Czech pronunciation: [ˈkarlovɪ ˈvarɪ] (listen); German: Karlsbad, pronounced [ˈkaʁlsˌbaːt] (listen)) is a spa city in the Karlovy Vary Region of the Czech Republic. It has about 48,000 inhabitants. It lies on the confluence of the rivers Ohře and Teplá, approximately 130 km (81 mi) west of Prague. It is named after Charles IV, Holy Roman Emperor and the King of Bohemia, who founded the city in 1370. It is the site of numerous hot springs (13 main springs, about 300 smaller springs, and the warm-water Teplá River), and is the most visited spa town in the Czech Republic. Until 1945, when the German-speaking inhabitants were expelled, the city was overwhelmingly German-speaking.

The journey goes through Poland, Slovakia, the Czech Republic and a piece of Germany. In total there are 11 driving days, a combination of touristic tours and routes from A to B. All routes avoid the highway and go exclusively on the smaller roads, which makes it a beautiful and varied journey.

Along the way you regularly come across sights, where you can stop to look around. These vary from beautiful viewpoints, to museums and special buildings. You also visit various national nature parks along the way, such as the Tatra Mountains, the Giant Mountains, Eagle Mountains, Krkonoše and Bohemian Switzerland. Because the overnight places are often also located in these areas, you can alternate the driving days with days with wonderful hiking trips.

If you only want to ride a motorcycle, then this collection can also be done in 2 weeks (including a return trip from the Netherlands).

The routes themselves can be challenging from time to time, particularly because the quality of the road surface in Eastern Europe - especially on the small country roads - is not always good. In June 2018 all routes were on paved roads.