Countries in this route
Route by Arno van Lochem - RouteXpert
This is the first route of a 26-part round trip of almost 6500 kilometers through Scandinavia with the highlights of the Lofoten and the North Cape. The tour is (partly) based on the route that the participants of the Arctic Challenge traveled in 2020.

The routes are easy for everyone to ride and are on well-paved roads. There may be a single hairpin bend to be taken, but these are easy to do.
If there is a piece of gravel in the route, a warning will be given and a detour will be indicated.

The route starts at a hotel in the north of Germany, on the island of Fehmarn near the town of Puttgarden. The hotel is located near the ferry, so you can start the crossing on time.
Via the Danish islands of Lolland, Falster and Seeland (Danish: Sjælland) you take the ferry from Helsingør to Helsingborg. A little further north, the route ends at Ängelholm.
The final destination is a hotel, but the camper has also been thought of, there are a number of campsites indicated where you can rent a hiker's cabin or camp.

Combination tickets are available for the ferries. You only book the first crossing, the ticket for the second is valid for a week. So you don't have to pay attention to the time.

Most of this route goes through open countryside on easy to navigate roads. Nice landscape, good roads and nice sights, hence the rating of 3 stars.

Somewhere in Sweden
Scandinavia… Not a country, but a beautiful area. Scandinavia is the collective name for the following Northern countries; Norway, Sweden and Denmark. Looking at history, Finland and Iceland are also part of Scandinavia: according to the Norwegian council they are part of it. All in all, Scandinavia is huge (more than a million square kilometers), while approximately 24 million people live there. For comparison; The Netherlands is more than 41,000 square kilometers with about 17 million inhabitants.
Of all western European countries, the Scandinavian countries probably have the most more or less untouched nature. In addition, they are countries that are easily accessible from the Netherlands. Norway is characterized by, among other things, the fjords and the Trollstigen, known to many motorcyclists. And where Sweden is known as wide and relaxing, everyone knows Finland as the land of 1000 lakes. All in all, legitimate reasons to traverse this beautiful nature in the north of Europe by means of a number of routes.

The route starts in Puttgarden on the North German island of Fehmarn where you take the ferry to Rødbyhavn, located in Denmark. Shortly after you get off the boat, a stop is scheduled at a petrol station in Lolland. There you can fill the tank and stock up on food and drinks in the adjacent supermarket for on the road should you need it. In this first part of the tour it is not too bad, but later the number of restaurants and petrol stations will be less expanded.

You are now driving on the Danish island of Lolland, Denmark's fourth largest island. It covers an area of 1,243 square kilometers and is separated from the island of Falster by the narrow Guldborgsund. Once you have crossed this water you will arrive at Falster, which has an area of 514 square kilometers. The island is connected by two bridges to the largest island, Zealand (Sjælland), the route goes over the left bridge, the Storstromsbroen.

The route sometimes follows the larger main roads (no highways), the other times it follows smaller rural roads. This is the case, for example, shortly after the coffee break on the 'coast' of the Præsto Fjord. You will then pass a windmill with a rich history. Built in 1472 as a water mill, the mill was later converted into a windmill. The reason for this was that the Faxe River could not always provide enough water to keep the mill running. The mill was in operation as a grain mill until 1939.

A little further on you will drive along the water again, this time the Køge Bugt, (Bay of Køge). Here you will find the 'Madurodam of Denmark'. It is a small copy of Køge's old days. The expertly recreated houses are all from the same period. Local volunteers are happy to produce these beautiful houses in a shed. If you have time to spare: Pay a visit to this colorful spectacle!

Shortly after lunch in Lillerød you will arrive at a ferry for the second time on this route. With this boat you leave Denmark behind and set course for Sweden. A crossing of half an hour, nice to stretch your legs and enjoy the view over the water.

After you have passed the first place you encounter in Sweden, Helsingborg, there is another coffee break planned, if only to get used to the Fika. A few times a day the time has come: Fika time. Loosely translated, this is 'drinking coffee'. There is no real translation for it, but for the Swedes fika is not just drinking a cup of coffee, it is a moment of peace where that cup of aromatic, black coffee in combination with a delicacy is central. Bring on that fika!

About 15 kilometers further you have arrived at the end of this route, hotel Riverside in Ängelholn. A simple but nice hotel, bookable through booking point com (see useful links below)
For campers there are also two campsites in the area marked as POI: Råbocka Familjecamping and Solhälls Familjecamping.

Have fun driving this route! 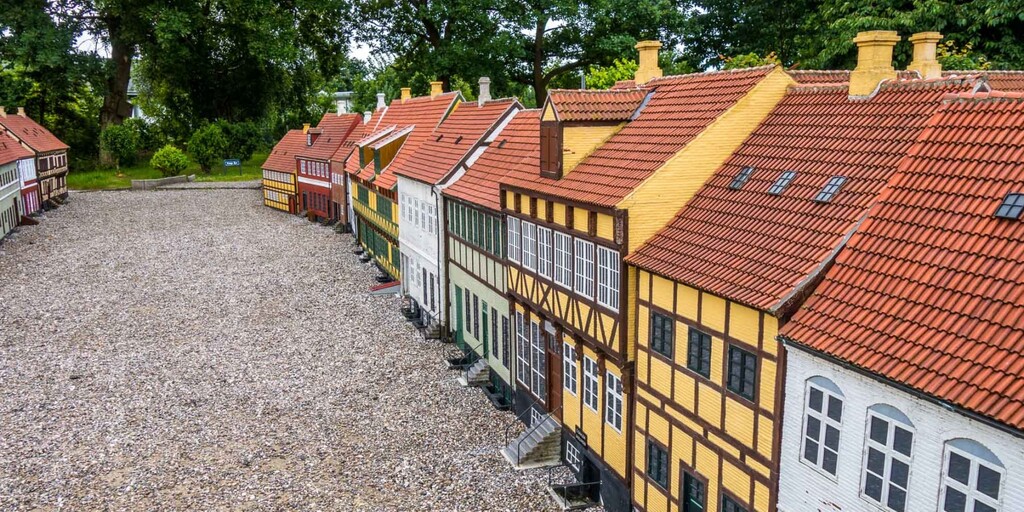 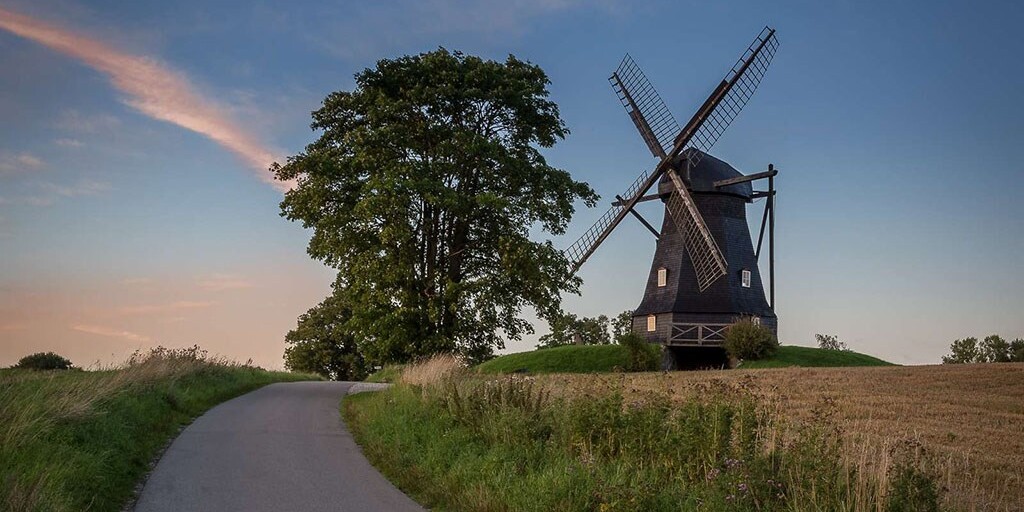 Skane lan
The images and text displayed here originate from the Wikipedia article "Skane lan", which is released under the Creative Commons Attribution-Share-Alike License 3.0.
About this region
Skåne County (Swedish: Skåne län), sometimes referred to as Scania County in English, is the southernmost county, or län, of Sweden, basically corresponding to the traditional province Skåne. It borders the counties of Halland, Kronoberg and Blekinge and connects to Capital Region, Denmark by the Öresund Bridge. The seat of residence for the Skåne Governor is the city of Malmö. The headquarters of Skåne Regional Council are located in both Kristianstad and Malmö.The present county was created in 1997 when Kristianstad County and Malmöhus County were merged; it covers around 3% of Sweden's total area, while its population of 1.3 million comprises 13% of Sweden's total population. Prince Oscar is Duke of Skåne.

200.43
Hours
View route collection 6500 kilometers through Scandinavia with the Lofoten and the North Cape as highlights
About this route collection
The Arctic Challenge Tour, on which this 26-part tour is partly based, is not a speed competition. It's a tour. It comes down to agility, good navigation and anticipation. The participants are obliged to adhere to the speed limit of the country concerned. Participants must find the ideal route with the shortest possible distance by adhering 100% to local traffic regulations. Of course, also take maximum speeds into account. The organization checks for speed limit violations. In the event of gross or repeated exceeding of the maximum speed, disqualification will follow for the relevant stage and for the final classification. The route and speeds driven are checked by means of a track and trace system. This equipment is built into every vehicle. Each team can then be followed accurately in the Back Office. Those who stay at home, interested parties and participants can also see the performance of the teams, because you can be followed live via the Internet. The Back office takes action when a team gets into trouble. (source: The Arctic Challenge website)

That's quite a luxury, having a back office behind you that keeps an eye on you. Most of us will not have that and are dependent on ourselves or the fellow traveler (s). The only agreement you have with the participants is that you must also adhere to the rules. Fortunately, like the participants, you don't have to complete this tour in 9 days, but you can take a little longer.

The highlight of the Arctic Challenge in 2020 was the Lofoten, an archipelago northwest of Norway. The Lofoten archipelago lies in the middle of the wild Norwegian Sea, well above the Arctic Circle. This special region offers a beautiful landscape with imposing mountains, deep fjords and long, wild sandy beaches where the sound of the seabird colonies can always be heard.
The archipelago is best known for its rich fishing tradition. Despite their isolated location, the Lofoten still make a prosperous impression. The whole economy is above all about fishing. The image of the Lofoten is mainly dominated by wooden racks with cod hanging to dry. The Lofoten fishery has been a household name for centuries. In the middle of winter, the ships set sail to catch the fish in just a few months. The rich fishing grounds are due to the North Atlantic Gulf Stream around the islands, where the fish have their spawning grounds. No oil drilling is allowed around Lofoten and the cod spawning grounds there.

The next destination for the participants was Sirkka, also known as Levi, a winter sports resort in Finnish Lapland. They stayed there for a few days to go ice-karting and enjoy the snow by making a trip with a snowmobile or skiing. This tour also takes you to Sirkka, but instead of staying there for a few days, you have the option to continue to the North Cape, the second highlight of this trip.

Imagine a place in the far north, where the Atlantic Ocean meets the icy waters of the Arctic Ocean. This place is the North Cape in Western Finnmark in Northern Norway. From here only the Spitsbergen archipelago lies between you and the North Pole and the sun shines for 2.5 months at a time; from mid-May to the end of July. Many visitors admire the midnight sun or the sunset over the Barents Sea from the North Cape Plateau.

For each route you will find a review with a description of the route, what you will pass by and what to see along the way. It also briefly describes how the participants in the Arctic Challenge in 2020 had to ride it, from which point to which point. Markers (waypoints) have been included along the way that indicate the end points of the stages that the participants had to complete. As mentioned, they covered the distance in 9 days, stages of more than 1000 kilometers were no exception.

Each route ends at a hotel. It is of course not an obligation to use these hotels, you can always look for another place to stay in the area, that decision is yours. However, my experience is that they are all simple but good hotels for a very reasonable price. They are known and can be booked at booking.com.

The routes of these collections:

Have fun riding these routes!