Countries in this route
Route by Stijn Claus/Motorhotels
Route along the Normandy coast. The route starts in Dieppe and passes all must see sights in Normandy.
The route ends at the Mont Saint Michel.
This route can be driven with the motor, car as the mobile home.

De kliffen van Étretat
This route does all the famous sights along the Normandy coast and can perfectly be used as the basis for a road trip through Normandy or France. For this trip, leave for at least 5 days so that you can take enough time to see everything. The route can be divided at will, there are more than enough accommodation options.

This route starts in the historic seaside town of Dieppe. This city with its rich history of war can be easily and toll-free to reach. The city originated around the year 1000 when the river that flowed into the Channel there was called the Deep by the Vikings. Afterwards, Dieppe was the scene of the 90-year war and an attack of the Allies took place on 19 August 1942.

From Dieppe we drive along the coast to Étretat. This town is best known for its L'aiguille, an excellent chalk cliff off the coast. Via a walking path on either side of the city you can see and admire the chalk cliffs. The view is phenomenal.

Le Havre is half an hour away. Le Havre is the largest city in Normandy and lies at the mouth of the Seine.
Because of the American bombing in September 1944, Le Havre was almost razed to the ground. The new city that emerged after the Second World War under the direction of the architect Auguste Perret was included in the World Heritage list by UNESCO in 2005.

From Le Harve we drive further south, we take a piece of motorway and cross the Seine via the Pont de Normandie. With a total length of 2,143.21 m, this bridge is the longest of its kind in Europe and was even the longest in the world at the time of opening.
On the other side of the bridge, Honfleur is a picturesque fishing village with picturesque fishing port.

From Honfleur we continue along the coast to the mouth of the river Orne. There we curve 15 kilometers inland towards Caen.

Caen is the third city of Normandy. It was the capital of the former Basse-Normandie region. The city has a rich history and numerous historical sites. Just outside the center is the Memorial of Caen located. This peace monument is built on the foundations of an old German command bunker from the Second World War.

When we leave Caen we drive again towards the sea and arrive at Juno Beach. This is one of the five landing sectors on the beaches of Normandy during the Allied landing during the Second World War. Juno Beach was assigned as landing zone to the Canadian 3rd infantry division, the British 2nd armored brigade and a unit of commands from the British Royal Marines.

Then we pass at the Mulberryhaven of Arromanches-les-Bains and the battery of Longues-sur-Mer. Both war monuments can be viewed freely.

Via Ohama beach and the Normandy American Cemetery and Memorial, an American military cemetery and monument in memory of the American soldiers who fell at the landing in Normandy during the Second World War, we arrive at Point du hoc.

Pointe du Hoc is the most impressive relic of the Second World War along the Normandy coast. In the Second World War this point was covered by German bunkers and cannons. On 6 June 1944 this rock was climbed by the US 2nd Ranger battalion. 225 men would land on the beach and had to destroy the guns.
The site is still littered with deep craters like a lunar landscape. Between these craters, which are caused by shelling of the Allies, are still broken parts of the German bunkers. Some of these bunkers are still fully or partially standing. A memorial and museum has been erected, dedicated to the bloody battle that has taken place.

After the last landing beach, Utah beach, we make a detour on the Normandy peninsula. Via the largest city of Cherbourg-en-Cotentin in the north of the peninsula we bow again and drive towards the final destination of these routes. Le Mont Saint Michel.

The Mont Saint-Michel is a small, rocky tidal island at the mouth of the Couesnon. The granite massif of Mont Saint-Michel was crowned with a medieval abbey. On the spire of the abbey church, since 1898, there is a statue of Saint Michael who stands out one hundred and seventy meters above the bay. The island lies about 1 kilometer from the coast at the place Avranches in Normandy. The island: it was accessible by land at low tide, but at high tide it was surrounded by water. Nowadays there is a narrow bridge, with a shuttle service, to the island. The Mont Saint-Michel, with its staircases, is only accessible to pedestrians. 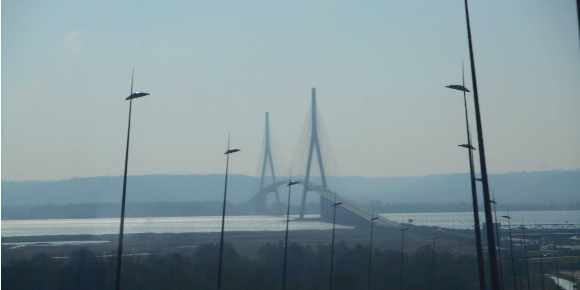 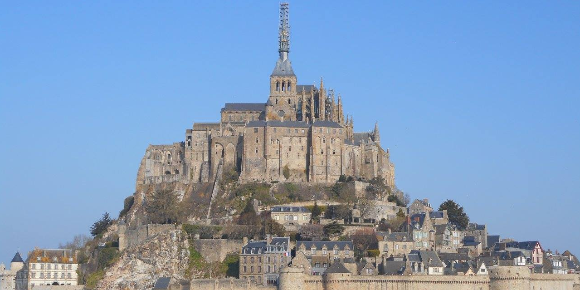 Use route
Share
Normandi
The images and text displayed here originate from the Wikipedia article "Normandi", which is released under the Creative Commons Attribution-Share-Alike License 3.0.
About this region
Clivina normandi is a species of ground beetle in the subfamily Scaritinae. It was described by Kult in 1959.