Countries in this route
Route by René Plücken (RouteXpert)
Published: 01/01/2020
That France is one of the most beautiful and best touring countries is beyond doubt. It offers an incredibly varied landscape with good roads and pleasant
climate. It is not for nothing that you see so many motorcyclists there.

My previous series of routes in France were based on the route descriptions from the Motortourgids France part 1 made by Bert Loorbach.

This route comes from Motortourgids France part 2 and the original name is "Arrival route to Burgundy; Directions first part".

The routes are sometimes slightly adjusted based on the tips that Bert Loorbach gives in his description, or because of a different place to spend the night, or to achieve the minimum length of 2 hours for the MRA Library. For each route there is a more detailed description in the review, including options to stay overnight or places of interest en route, which are also indicated with a POI and if possible with a short description

The route is made suitable for Garmin, TomTom, Harley-Davidson BoomBox 2019 and Navigation App, can be downloaded for free and without My-Route-app registration. To do this, first click on the 'Use route' button and then on 'Save as'.

D977 from Sedan to Chémery-sur-Bar
This is the first part of the approach route to the Burgundy region.
The route is suitable to get to Burgundy or as an alternative route to the south and can be used as a starting route for one of the other routes in this area as they are described in the Motorbike guides part 1 and 2.

The roads in this area seem to be made to shoot and enjoy at the same time. Green hills all around, lots of water and a perfect road surface.
The starting point is the town of Sedan, southeast of Douzy is a motor-friendly site on a small lake next to the D984. If you do not want to camp then you can spend the night in Sedan in a beautiful castle; The Hôtel Le Château Fort de Sedan, both are marked with a POI and the links are at the bottom of the review

From Sedan we drive via the D977 through the beautiful rolling countryside to Le Chesne.
At RP2 lies the castle of Château de Rocan, it is private property and therefore cannot be visited, but nice to take a picture of it. For this you have to deviate from the route to find the castle after 300 meters on a dirt road behind the farm. It was built in the first part of the 16th century by a Raoul de Coucy. The castle went through the hands of various families, including the Du Lys and the d'Escannevelle. In 1641 the castle was attacked by imperial-Spanish troops, who had just supported French dissatisfied in the nearby Battle of La Marfée against the royal French army of Louis XIII, who had occupied the castle for a few days.

We drive via Lac de Bairon (RP4), a lake that is divided in two by a small road (D212), just north of the town of Le Chesne. The old part of it used to belong to the monks from Chémery-sur-Bar.

We continue to Vouziers, where the river Aisne is crossed. Those who love beautiful portals can go to Vouziers to view the Renaissance front of the St. Maurille church. This special portal, created in the mid-16th century, remained detached from the rest of the church for more than two centuries due to the religious wars. It was not built again until 1769.

The military cemetery of Vouziers contains the pilot Roland Garros, who crossed the Mediterranean Sea with his plane in 1913. He died in this area during the First World War. The Paris Grand Slam tennis tournament is named after him. His grave (and also monument) is located at the military cemetery "Cimetière militair allemand de Vouziers". If you want to visit this it is best to park in the center (RP6) and walk to the cemetery.

We continue on to Sainte Menehould, where Dom Pérignon was born in 1638, who was the first to have the champagne wines sparkled and then to Givry-en-Argonne to Vitry-le-François. This place was built to replace the neighboring Vitry-en-Perthois, which was completely burned down by the troops of Quint in 1544. The center has been built for military-strategic reasons with only straight lines. In 1940 the place was again almost completely destroyed by a bombing and again
rebuilt on the map dating from the 16th century.
The next town is Brienne, which is dominated by Napoleon, because he studied at the military school for five years. At RP11 is a museum dedicated to him.

We continue through the Forêt d'Orient nature reserve, which has three lakes. There are several hotels and campsites on these lakes where you can spend the night during your stay in this area.

The original end point of this ride is in Bar-du-Seine (RP13) a beautiful town on the still fairly narrow Seine. Bar-sur-Seine acts as a sort of gateway between Champagne and Burgundy. You can see from the beautiful old houses, some of them with half-timbering, that things used to go well here. This is a nice town for a walk and something to drink and eat. There is not much choice to spend the night in Bar-du-Seine, so we continue to Mesnil-Saint-Père on Lac d'Orient, where there are several hotels and campsites to spend the night.

I appreciate this route with 3 *** stars because of the beautiful roads through the beautiful French countryside and the nice pictures en route. 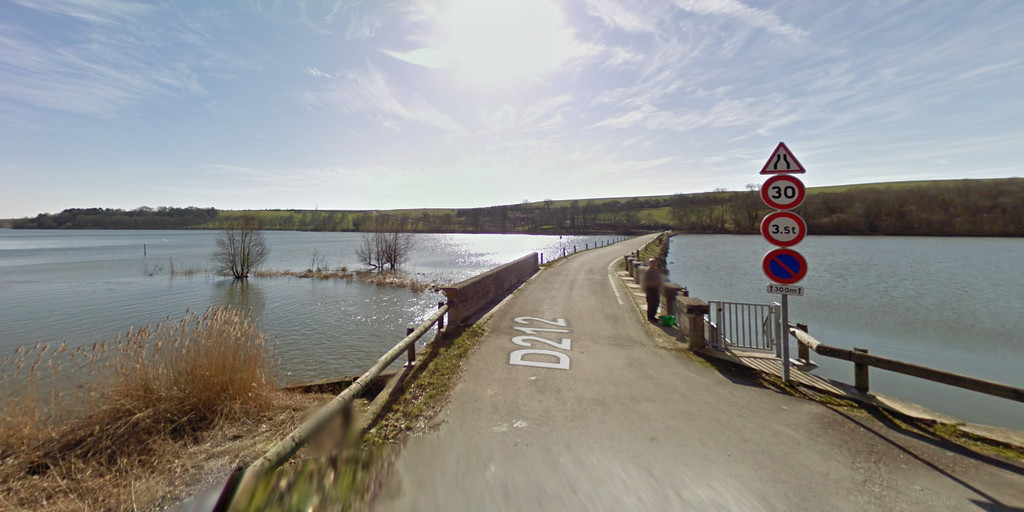 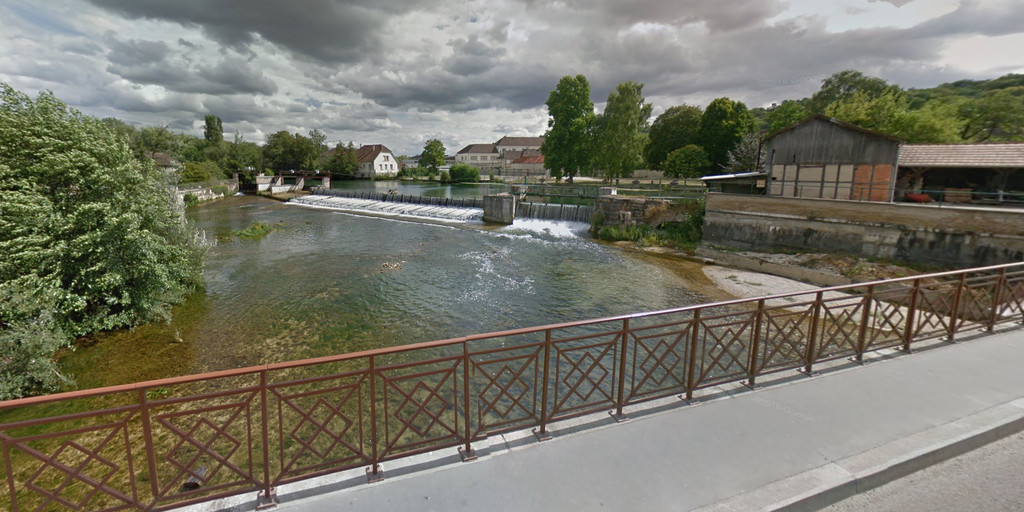 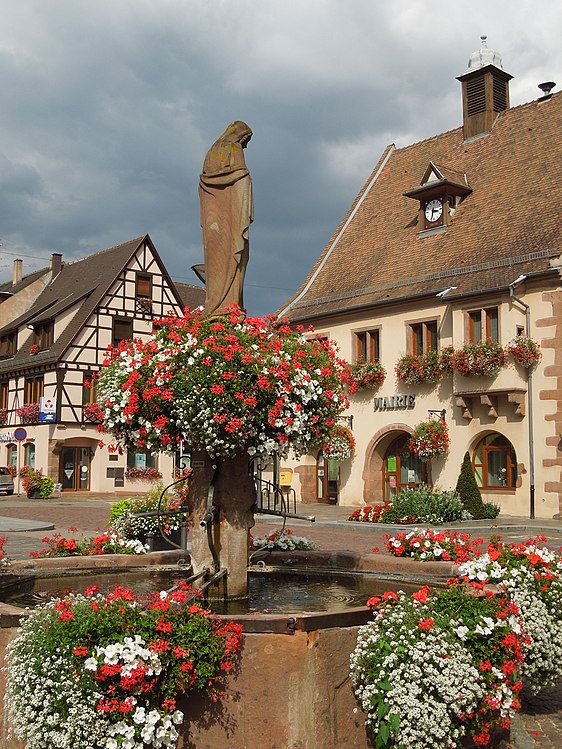 Grand Est
The images and text displayed here originate from the Wikipedia article "Grand Est", which is released under the Creative Commons Attribution-Share-Alike License 3.0.
About this region
Grand Est ("Great East"; French pronunciation: [ɡʁɑ̃t‿ɛst] (listen); Alsatian: d'r Grossa Oschta; Moselle Franconian/Luxembourgish: de Grouss Osten; Rhine Franconian: de Groß Oschte; German: der Große Osten [dɛɐ̯ ˈɡʁoːsɐ ˈɔstn̩]) is an administrative region in northeastern France. It superseded three former administrative regions—Alsace, Champagne-Ardenne, and Lorraine—on 1 January 2016 under the provisional name of Alsace-Champagne-Ardenne-Lorraine (ACAL or, less commonly, ALCA), as a result of territorial reform which had been passed by the French legislature back in 2014.The region sits astride three water basins (Seine, Meuse and Rhine), spanning an area of 57,433 km2 (22,175 sq mi), the 5th largest in France, and includes two mountain ranges (Vosges and Ardennes). It shares borders with Belgium, Luxemburg, Germany, and Switzerland, and stands partly within the European Megalopolis. As of 2017, it had a population of 5,549,586 inhabitants. The administrative capital and largest city, by far, is Strasbourg. The East of France has a rich and diverse culture, being situated at a crossroads between the Latin and Germanic worlds which is reflected in the variety of languages spoken there (Alsatian, Champenois, Lorraine Franconian etc.). Most of today's Grand Est region was considered "Eastern" as early as the 8th century, when it constituted the southern part of the Francian territory of Austrasia. The city of Reims (in Champagne), where Frankish king Clovis I had been baptized in 496 AD, would later play a prominent ceremonial role in French monarchical history as the traditional site of the coronation of the kings of France. The Champagne fairs played a significant role in the economy of medieval Europe as well. Alsace and Lorraine thrived in the sphere of influence of the Holy Roman Empire for most of the Middle Ages and Renaissance. The region is home to distinctive traditions (the celebration of Saint Nicholas Day, Christmas markets, or traditions involving the Easter hare in Alsace and Lorraine). Alsace-Moselle are furthermore subject to local law for historical reasons. With a long industrial history as well and its agriculture and tourism (arts, gastronomy, sightseeing etc.), the East of France is one of the top economic producing regions in the country.

The routes are sometimes slightly adjusted based on the tips that Bert Loorbach gives in his description, or because of a different place to spend the night, or to achieve the minimum length of 2 hours for the MRA Library. For each route there is a more detailed description in the review, including options for accommodation or places of interest along the way, which are also indicated with a POI and, if possible, with a short description.

Two or more routes have been made for a number of areas, such as Burgundy, Auvergne, The Alps, Tarn and Cévennen and Nord-Pas de Calais. These routes can be nicely combined in a multi-day trip.