Route Summary
Route 1 of 3 travelling through Brittany and Normandy visiting iconic and historic sites. Starting from the Roscoff ferry terminal and ending at the Cherbourg ferry terminal. UK departure will be Plymouth and depending on time of year or your choice, arrival will be Poole or Portsmouth. Arrive in Roscoff around 08:00 and depart Cherbourg around 17:00. making this a great 3 day 2 night excursion.
I have awarded 4**** stars for this route because of the magnificent coastal views and peaceful rural landscapes on a mixture of roads suitable for all.

RouteXpert Review
Starting from the ferry port , this route first travels around the coast giving you a good insight into the old town of Roscoff. You'll pass the square tower Lighthouse, who's construction was halted in 1914 because of WW1, then completed in 1917. Then the house of Mary Stuart, Queen of Scots and finally the Exotic and Botanical Garden of Roscoff created by Louis Kerdilès. Using the smaller roads, you'll pass through Saint-Pol-de-Léon where you can fill up with fuel. It's then onto the coast to the Bay of Morlaix. Here you'll follow the coast as the bay gets narrower and narrower taking to into the town of Morlaix. With one foot in the Leon area and the other in Tregor, Morlaix nestles in an estuary enclosed by the foothills of the Monts d’Arrée mountains. This town, brimming with art and history, is lovely to look at, whether from below the tiered storeys of its famous half-timbered houses, or from the heights of its viaduct.
Leaving Morlaix behind, you head north on the opposite bank of the river to join up again with the rugged coast. The Brittany shoreline is made up of many small bays and this route will takes you around a few of them.
There is a rural museum at RP 17, Musée Rural du Trégor. This is full tools and equipment that were used in bygone days.
There's a coffee stop with great views and a bit more of the coast to explore before heading inland at Saint-Michel-en-Grève.
The rural roads and landscape is equally as pleasant to the traveller, passing through beautiful stone built villages all having their own magnificent churches standing proud. You'll reach the Côtes-d'Armor or coast of the sea at Binic ‑ Etables‑sur‑mer where I have suggested a lunch stop. There is a car park for cars and motorcycles can park on the pavement by the roundabout.
Once a little medieval village, Binic grew to become one of the most important ports in the French fishing industry. It was the expeditions of the ‘terre-neuvas’ – the fishermen that left France to fish in Newfoundland waters – that secured Binic its place in history, and the imposing granite and schist ship-owners’ houses lining the Quai Jean Bart are testament to this prosperous business. As you can imagine, seafood is offered at most of the many restaurants, bon appetit.
After lunch, the route uses a couple of faster roads to take you to from Brittany to Normandy. It's only an hour on generally quiet roads with pleasant views of the surrounding countryside and you have a chance to top up with fuel at RP 34.
Within a couple of minutes of leaving the dual carriageway, you'll get your first glimpse of Mont St Michel.
Mont Saint Michel is one of Europe’s most unforgettable sights. Set in the mesmerising bay where Normandy and Brittany merge, the island draws the eye from great distances. The staggering location has long inspired awe and the imagination. This remarkable medieval walled city, crowned by its great gothic abbey, is built on a small granite outcrop standing all by itself in the flats of the estuary of the river Couesnon, in an area now known as Mont Saint Michel bay. Mont Saint Michel was one of the first monuments to be classed as a UNESCO world heritage site, as far back as 1979.
Recently, the visitor car parks have been relocated away from the shoreline, to preserve the Mont Saint Michel’s exceptional surroundings. The new car parks stand approximately 1.5 miles away from the island. Once you have parked, head for the Place des Navettes, where specially devised, ultra-modern shuttle buses called Passeurs will take you to the mount itself. These Passeurs operate daily, at very regular intervals, from 7.30am to midnight.
The route leaving Mont St Michel travels through rich agricultural farmland offering some great views back towards the island, don't forget to turn your head to check for views. You will pass by several ancient farm buildings alerting you to the history of rural life in this area. Crossing over La Selune River leaves you just a few minutes away from the ibis Budget hotel on the outskirts of Avranches. 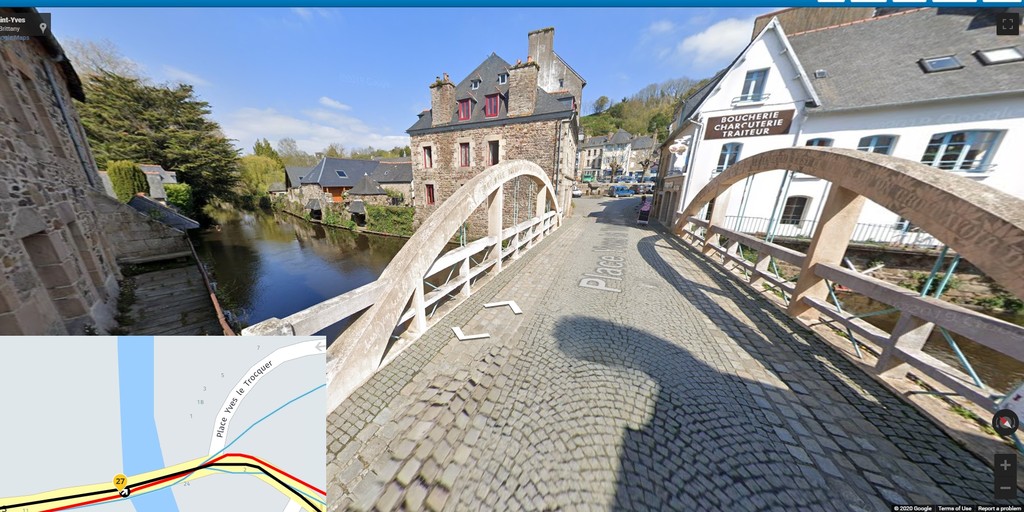 RP 27. Crossing the Trieux river on the cobbles of the medieval town of Pontrieux. 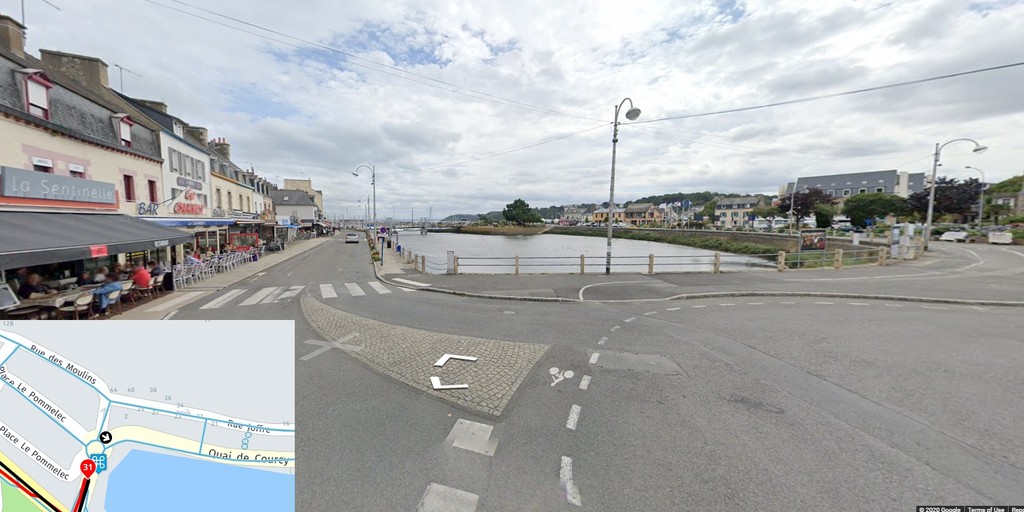 RP 31. Lunch stop at Binic-Étables-sur-Mer, park motorcycles on pavement and find a restaurant. 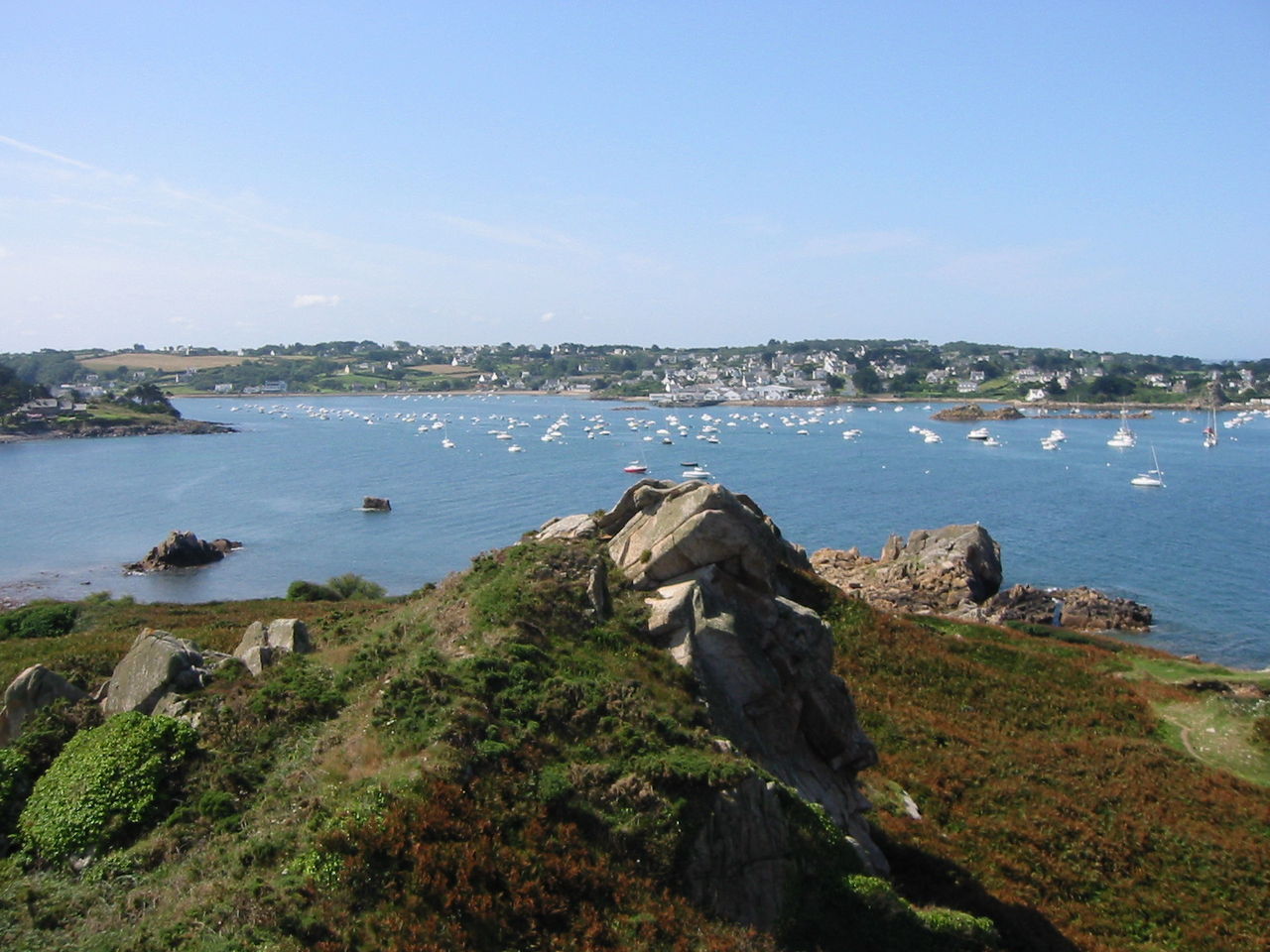 Brittany
About this region
Brittany (Breton: Breizh [brɛjs]; French: Bretagne [bʁətaɲ]) is the farthest west of the regions of Metropolitan France. It is covers about four-fifths of the territory of the historic province of Brittany. Its capital is Rennes.

Brittany is a peninsular region bordered by the English Channel to the north and the Bay of Biscay to the south, and its neighboring regions are Normandy to the northeast and Pays de la Loire to the southeast. Bro Gozh ma Zadoù is the anthem of Brittany. It is sung to the same tune as that of the national anthem of Wales, Hen Wlad Fy Nhadau, and has similar words. As a region of France, Brittany has a Regional Council, which was most recently elected in 2015.

Route Collections in this region
25 Magnificent trails in France
This MRA route collection contains 25 beautiful motorcycle routes in different parts of France, such as the Ardennes, the Alsace, Vercors, the Drôme, the Ardèche, Cote d'Azure, Gorges du Verdon, the Ariège, the Dordogne and Brittany.

The routes have been carefully created by Bert Loorbach, who is an enthusiastic motorcyclist himself. He lived in France for a year and a half, during which time he devoted himself to mapping the unknown and beautiful back roads of France especially for motorcyclists.

I have taken over the routes in MRA and sometimes adjusted them slightly to make them even more interesting for the motorcyclist.

View Route Collection
25 Routes
4105.48 km
105.96 Hours
3 day mini break through Brittany and Normandy
The overnight ferry crossing from Plymouth to Roscoff is a relaxing way to begin your 3 days of sightseeing in North West France. Touring the coasts and countryside of Brittany and Normandy, you'll discover beautiful sandy beaches, tiny fishing ports, bustling market towns and iconic and historical sites. Don't forget to sample Brittany's renowned seafood and delicious sweet and savoury pancakes, or Normandy cider and of course their 'hard to say no to' apple brandy, Calvados .
Day 1 takes you along the beautiful and rugged coast to Mont St Michel, a World Heritage site, visible for miles around. This is a wonderful place at any time of year, although be prepared for it to be very busy in summer. Your first hotel is just 30 minutes further along the coast at Hôtel Ibis Avranches Baie du Mont Saint-Michel. Other hotels are nearby and links for this hotel and your second night at Port en Bessin are in the individual route reviews.
Day 2 takes you first to Bayeux, world famous for its astonishing tapestry depicting the Norman Conquest of England in 1066, remarkable as a work of art and important as a source for 11th-century history. Bayeux also has a picturesque old quarter, WW2 museum and cathedral worth visiting (park motorcycles next to cathedral).
Then you can take in the sobering atmosphere at Pegasus Bridge, liberated by the British 6th Airborne Division glider unit, a full size replica of a Horsa glider shown in the picture above is on display, and the tale of the men it transported gives you a remarkable insight into the scale, ferocity and poignancy of Operation Overlord. Arromanches' Mulberry Harbour (Port Winston) and the gun emplacements dotted along the coast that you'll visit are reminders of the combats that took place here over 70 years ago. A great night is guaranteed at your second hotel in the fishing port of Port en Bessin where you can sample local cider (cidre) some of the freshest seafood available, fine wine, and finish off with some local calvados.
Day 3 tells the American story of D-Day with visits to Omaha and Utah beaches, various museums and the first town in France to be liberated during operation Overlord - Sainte-Mère-Eglise where an effigy of private John Steele dangles by his parachute from the church steeple.
Your return to the UK is via Cherbourg, to either Poole or Plymouth depending on the time of year, most sailings are around 17:00 hrs. Details from Brittany Ferries can be found in the link in the first review.
This is a great mini tour that'll give you a good glimpse of what this part of northern France has to offer and will leave you wanting to return.
View Route Collection
3 Routes
617.18 km
11.29 Hours