Countries in this route
Route by Nick Carthew - RouteXpert
Some of the D-Day sites all very thought provoking and worth a visit. The tour starts and finishes on the South bank of the River Seine, in Honfleur, perhaps the prettiest harbours in all of France.
Use route
Share

Merville Battery
WW2 D Day sites of Normandy.
This route is all about the sites to visit rather than the ride itself, although there are still plenty of things to feed your eyes in between the stops. Normandy is a great area to visit and is full of interesting things to see and do. This is a circle route starting from the stunningly beautiful harbour town of Honfleur. The architecture of half timbered houses, the magnificent views of the Pont de Normandie, the seafood restaurants, bars and shops make Honfleur a good base for exploring the area. In September 2016, five of us plus four motorcycles stayed for 7 nights in an Airbnb cottage called; Maison du Colline. It cost £730.00 which is less than £150.00 per person. A link for this is below this review.

This route, like most of my routes, starts with fuel. This is at the pink route point (RP) 3. The route is 125 miles and will take a little over 4hrs but with all of the stops and things to see, we took 10hrs, so an early start is advised.

When we visited the Batteries du Mont Canisy RP 7, it was looking a little overgrown but it is still interesting and it is free. I believe they have guided tours on Mondays. We now go along the coast to RP 13 and the Batterie de Merville, this is a must see site and is very well kept, hence there is a small fee 6.50 € and free parking. A C-47 SNAFU special parked outside dominates your arrival and the sound and light show in one of the bunkers leaves you wondering!
We visit the most iconic of of the D-Day sites next at RPs 16 & 17 - the Pegasus Memorial and Pegasus Bridge. I don't think I need to write much about these, once again they are a must see on your list. It costs 8 € to enter, money well spent in my opinion. The museum is full of personal effects of the brave men that fought, seeing these made it feel real. There is a full size replica Horsa Glider in the grounds as well as several sections from original Horsa Gliders. The original bridge is in the grounds too after it was replaced with a wider a stronger one in 1994. The Café Gondrée stands on the northern bank of the canal, near Pegasus Bridge. It was the first house to be freed on D-Day and was listed Historical Monument in 1987.
It's a short ride to the next site, the Hillman Fort at RP 20. The Hillman fort was a German bunker complex and command post. It is hardly visible from the road as most of it is underground. It is free to see and worth a visit.
We had a late lunch at Courseulles sur Mer RP 27 of Moules frites 12 € yum yum.

Along the coast now and past Gold Beach, and onto the 360° cinema at Arromanches RP 29 and Arromanches Beach and Mulberry Harbour (Port Winston). The cinema show lasts for about 15 mins and costs 6 €. You are surrounded by 9 giant screens all playing simultaneously with a thundering soundtrack. We all felt a little tearful as we left.
There are great views of the Mulberry Harbour from here. Just down the hill at Arromanches Beach, there are plenty of places to eat or have a coffee, we found it to be quite arty too.
The Longues sur Mer gun battery is at RP 35 and is free to see. The Atlantic Wall fortifications had a key position in Longues-sur-Mer with a gun battery consisting of a large command bunker and four gun positions with concrete casemates. There were also smaller machine gun emplacements and shelters for personnel, but the star attractions were definitely the 152mm navy guns with their steel enclosures. Disabling this gun battery that was overlooking the landing beaches Omaha and Gold was a major task of the D-Day operation.
Into the city of Bayeux next for the Bayeux War Cemetery at RP 37 and Bayeux Museum at RP 38. To be honest, we didn't have enough time to visit the museum. The cemetery contains 4,648 burials, mostly of the invasion of Normandy. Opposite this cemetery stands the Bayeux Memorial which commemorates more than 1,800 casualties of the Commonwealth forces who died in Normandy and have no known grave.
From here, the route travels through the city of Caen past the Carpique Airfield. On June 6, 1944, the Allies commenced a second front in Normandy, and both Caen and Carpiquet Airport became objectives for the British and Canadian units landing on Sword and Juno Beaches. The complexity and magnitude of the Carpiquet defenses by early July are worth noting. In a one-square-mile area around the village and the wheat fields that spread around the airport, the Germans had an estimated six 75mm cannons in turrets of concrete and steel as well as twelve anti-aircraft guns, some of which were the formidable 88mm.

From here we go onto the lovely medieval village of Beaumont en Auge at RP 46, this is a great place to stop for a coffee and admire the old architecture. Back to our rented cottage now for a slap up feast and BBQ.

As with all MRA routes, this one can be adapted to suit your needs. Once you have chosen a route and added it to your library, you may wish to change the start and finish positions or add extra waypoints, or even reverse or split the route. This is easily done when you have a Gold membership of MyRoute-app and then by using the Gold Toolkit. 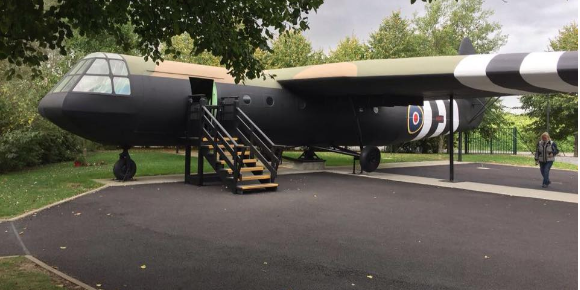 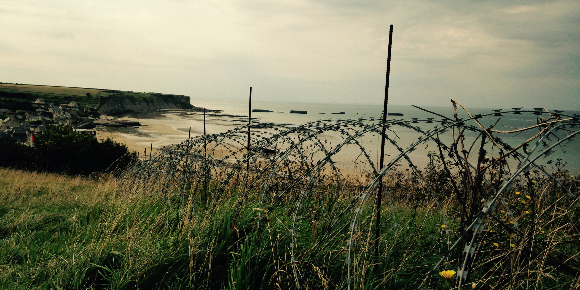 Normandi
The images and text displayed here originate from the Wikipedia article "Normandi", which is released under the Creative Commons Attribution-Share-Alike License 3.0.
About this region
Normandy (; French: Normandie [nɔʁmɑ̃di] (listen); Norman: Normaundie; from Old French Normanz, plural of Normant, originally from the word for "northman" in several Scandinavian languages) is the northwesternmost of the 18 regions of France, roughly coextensive with the historical Duchy of Normandy. Normandy is divided into five administrative departments: Calvados, Eure, Manche, Orne, and Seine-Maritime. It covers 30,627 square kilometres (11,825 sq mi), comprising roughly 5% of the territory of metropolitan France. Its population of 3,322,757 accounts for around 5% of the population of France. The inhabitants of Normandy are known as Normans, and the region is the historic homeland of the Norman language. The neighboring regions are Hauts-de-France and Ile-de-France to the east, Centre-Val de Loire to the southeast, Pays de la Loire to the south, and Brittany to the southwest. The capital is Rouen. The historical region of Normandy comprised the present-day region of Normandy, as well as small areas now part of the departments of Mayenne and Sarthe. The Channel Islands (French: Îles Anglo-Normandes) are also historically part of Normandy; they cover 194 km² and comprise two bailiwicks: Guernsey and Jersey, which are British Crown dependencies over which Queen Elizabeth II reigns as Duke of Normandy.Normandy's name comes from the settlement of the territory by mainly Danish and Norwegian Vikings ("Northmen") from the 9th century, and confirmed by treaty in the 10th century between King Charles III of France and the Viking jarl Rollo. For four hundred years following the Norman conquest of England in 1066, Normandy and England were linked by having the same person reign as both Duke of Normandy and King of England.