Back to United Kingdom Back to Netherlands
DrivingCyclingBy foot 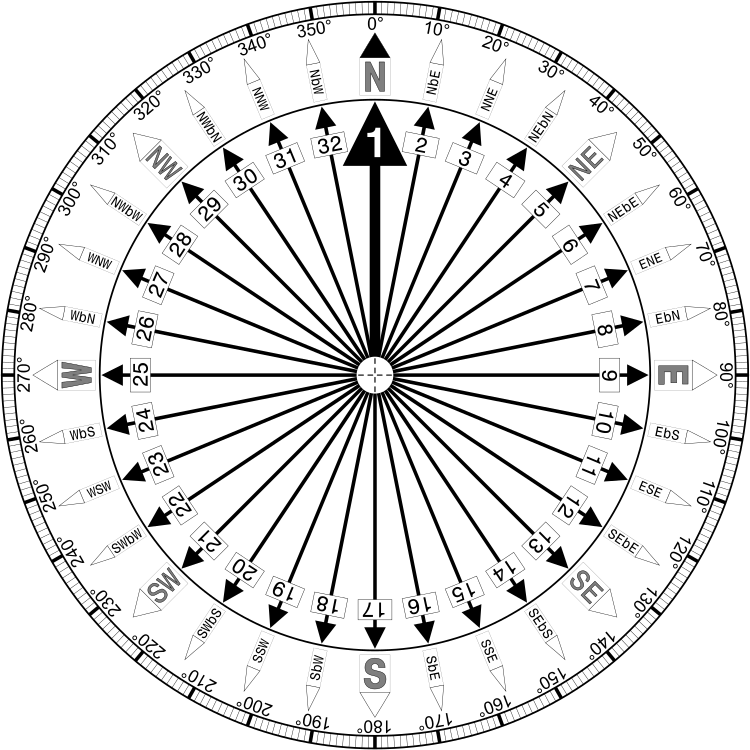 South West
The images and text displayed here originate from the Wikipedia article "South West", which is released under the Creative Commons Attribution-Share-Alike License 3.0.
About this region
The points of the compass are the vectors by which planet-based directions are conventionally defined. A compass rose is primarily composed of four cardinal directions—north, east, south, and west—each separated by 90 degrees, and secondarily divided by four ordinal (intercardinal) directions—northeast, southeast, southwest, and northwest—each located halfway between two cardinal directions. Some disciplines such as meteorology and navigation further divide the compass with additional vectors. Within European tradition, a fully defined compass has 32 'points' (and any finer subdivisions are described in fractions of points).Compass points are valuable in that they allow a user to refer to a specific azimuth in a colloquial fashion, without having to compute or remember degrees.

24.75
Hours
View route collection Great 6 day tour of Wales
About this route collection
This collection of 6 routes all pass through at least 1 of the 3 spectacular national parks of Wales'. Each park is unique and individual and the landscapes vary from the vast, remote and wide open moorland of the Brecon Beacons to the rugged mountains and glistening lakes of Snowdonia and the spectacular coastline of the Pembrokeshire coast. Each is a delight to travel through and these routes will take you to some of the best beauty spots.
There are some great attractions to visit too, as well as having more than it's fair share of fantastic castles and historic buildings, there is the worlds fastest zip line, a balcony road used for world rally stages, mysterious caves and magical waterfalls and a museum of land speed records. All of these can be seen on the routes in this collection.
Although each route in this collection is a separate stand alone route, they will all link up seamlessly to make a 6 day tour that you will remember. The tour starts and ends in Gloucester which can be easily reached in a day from any of the Channel ports.
Enjoy Wales.

21.58
Hours
View route collection 5 Great rides in the south west of England
About this route collection
Come to the The West Country in the southwest of England and explore it's very beautiful and varied landscape. The coastal roads are arguably the best in England, these allow you to really appreciate the beautiful and sometimes wild and rugged shores of the southwest. Inland is very rural and is heavily farmed, mainly with livestock which thrive on the rich pastures and hillsides. There are 3 moors in the West Country, Exmoor, Dartmoor and Bodmin Moor. Exmoor and Dartmoor are National parks and are magical to ride or drive through giving the traveller a "WoW" around every corner.
I must mention the towns and villages too, there are countless historical buildings to seek out and view from castles and prehistoric stones to prisons and wooden sheds. The West Country people have been receiving guests for hundreds of years and you will always receive a warm welcome.
I live in the West Country and have put this collection of 5 routes together that show off my home region to it's finest. Enjoy.

Round trip from Gloucester through The Cotswolds
View route
Expert rating:

Round trip from Bideford to Crediton and Hartland Quay
View route
Expert rating: