Back to United Kingdom Back to Netherlands
DrivingCyclingBy foot

The prettiest verified routes in Ulster 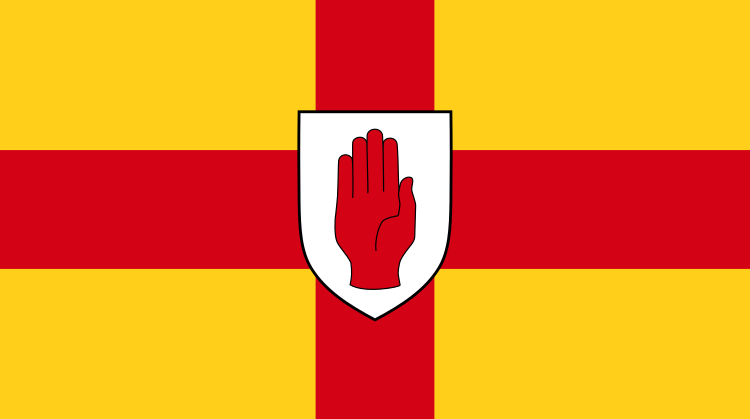 Ulster
The images and text displayed here originate from the Wikipedia article "Ulster", which is released under the Creative Commons Attribution-Share-Alike License 3.0.
About this region
Ulster (; Irish: Ulaidh [ˈʊlˠəi] or Cúige Uladh [ˌkuːɟə ˈʊlˠə]; Ulster Scots: Ulstèr or Ulster) is one of the four traditional Irish provinces, situated in the north of Ireland. It is made up of nine counties: six of these constitute Northern Ireland (a part of the United Kingdom); the remaining three are in the Republic of Ireland. It is the second largest (after Munster) and second most populous (after Leinster) of Ireland's four provinces, with Belfast being its biggest city. Unlike the other provinces, Ulster has a high percentage of Protestants, making up almost half of its population. English is the main language and Ulster English the main dialect. A minority also speak Irish, and there are Gaeltacht (Irish-speaking regions) in southern County Londonderry, the Gaeltacht Quarter of Belfast and in Donegal, where 25% of the total Gaeltacht population of Ireland is located. Lough Neagh, in the east, is the largest lake in the British Isles, while Lough Erne in the west is one of its largest lake networks. The main mountain ranges are the Mournes, Sperrins, Croaghgorms and Derryveagh Mountains. Historically, Ulster lay at the heart of the Gaelic world made up of Gaelic Ireland, Scotland and the Isle of Man. According to tradition, in ancient Ireland it was one of the fifths (Irish: cúige) ruled by a rí ruirech, or "king of over-kings". It is named after the overkingdom of Ulaid, in the east of the province, which was in turn named after the Ulaid folk. The other overkingdoms in Ulster were Airgíalla and Ailech. After the Norman invasion of Ireland in the 12th century, eastern Ulster was conquered by the Anglo-Normans and became the Earldom of Ulster. By the late 14th century the Earldom had collapsed and the O'Neill dynasty had come to dominate most of Ulster, claiming the title King of Ulster. Ulster became the most thoroughly Gaelic and independent of Ireland's provinces. Its rulers resisted English encroachment but were defeated in the Nine Years' War (1594–1603). King James I then colonized Ulster with English-speaking Protestant settlers from Great Britain, in the Plantation of Ulster. This led to the founding of many of Ulster's towns. The inflow of Protestant settlers and migrants also led to bouts of sectarian violence with Catholics, notably during the 1641 rebellion and the Armagh disturbances. Along with the rest of Ireland, Ulster became part of the United Kingdom in 1801. In the early 20th century, moves towards Irish self-rule were opposed by many Ulster Protestants, sparking the Home Rule Crisis. This, and the subsequent Irish War of Independence, led to the partition of Ireland. Six Ulster counties became Northern Ireland, a self-governing territory within the United Kingdom, while the rest of Ireland became the Irish Free State, now the Republic of Ireland. The term Ulster has no official function for local government purposes in either country. However, for the purposes of ISO 3166-2, Ulster is used to refer to the three counties of Cavan, Donegal and Monaghan only, which are given country sub-division code "IE-U". The name is also used by various organisations such as cultural and sporting bodies.

129.38
Hours
View route collection Complete tour of Ireland
About this route collection
Ireland is a beautiful country to drive. This collection contains 10 connecting routes that take you past the most beautiful, cities, villages, sights and wonders of nature.

All routes include reviews, route points for hotels, restaurants and POI.
The Irish population is very friendly and hospitable, in every village there are several pubs and restaurants where you can enjoy Irish cuisine.

There are several (historical) sights included in the routes, here is a summary overview per route, in the reviews of the routes you will find more details.

The routes are mainly country roads, often with beautiful curves, but sometimes very narrow or of poor quality. Driving experience is required, partly because of driving on the left side of the road.

You drive through nature parks and pass such as the Healy Pass, Conner Pass, Priest's Leap and Molls Gap. Two beautiful routes are the famous Ring of Kerry (IRL5) and Ring of Beare (IRL6). These are long journeys with many beautiful things along the way, so staying overnight while on the road is highly recommended. It can also be very busy on these routes in the weekends.

The other two routes in this collection is The Wild Atlantic Way from North-South and from South to North. This route is a sensational journey past towering cliffs and lively villages and towns, past hidden beaches and beautiful bays. This route follows the West Coast and you do multiple places from the other routes. The review of the route contains more details and for even more information I refer to https://www.wildatlanticway.com/home

All routes in this collection are all beautiful and challenging and can be driven by car or motorcycle.
Have fun with these routes.