Round trip from Scarborough over the North York Moors National Park

Countries in this route
Route by Nick Carthew - (MRA Senior)
Published: 08/04/2021
A route that criss crosses the beautiful and sometimes dramatic North York Moors National Park. Forest, moorland and rural countryside dominate this glorious route. There are some cattle grids and loose livestock along the way to look out for. Excellent scenery on great roads earn this route 4**** stars.
Use route
Share

Highest point of the route, Ledging Hill at over 420 m.
There's nowhere else on earth quite like the North York Moors National Park. Where else can you experience a landscape where stunning moorland, ancient abbeys and picturesque villages live side by side in such perfect harmony? It's a living, breathing scene that will take your breath away.
Starting from a cafe on the seafront at Scarborough, the route will soon have you travelling through forested roads as you begin the climb up onto the moors. Because of the nature of the landscape the route is either climbing or descending or travelling across the vast open moorland adding to the enjoyment of the stunning scenery.
Fylingdales Moor is not only beautiful, especially when the heather is in bloom, it's also very significant in the protection of the UK. It is home to the famous early warning system at RAF Fylingdales, once 3 huge golf ball shaped structures dominated the skyline, these have now been replaced by a giant pyramid that looks like a speaker.
In September 2003 a huge fire swept across the moors and it uncovered not only prehistoric features but also relics of the moor's use from WW2 and into the 1950's as a training area for troops. Features such as "foxholes", shell craters and tank tracks could be seen clearly for the first time in sixty years. History and nature have combined to produce an amazingly vibrant landscape, rich in heritage and wildlife and an inspiring place to visit.
Just after the RAF base is the; dare I say famous, Saltergate car park and viewpoint. This looks out across the Hole of Horcum.
The Hole of Horcum is one of the most spectacular features in the National Park – a huge natural amphitheatre 400 feet deep and more than half a mile across. Legends hang easily upon a place known as the 'Devil's Punchbowl' – the best-known says that it was formed when Wade the Giant scooped up a handful of earth to throw at his wife during an argument.
Actually, it was created by a process called spring-sapping, whereby water welling up from the hillside has gradually undermined the slopes above, eating the rocks away grain by grain. Over thousands of years, a once narrow valley has widened and deepened into an enormous cauldron – and the process still continues today.
Descending from the moor to the ancient market town of Pickering takes you passed Pickering Castle.
Pickering Castle was a motte-and-bailey castle built by the Normans as part of the suppression of Northern England. It saw little military action but was a popular location for English Kings due to the proximity of the adjacent Royal forest. It was regularly upgraded until the fourteenth century after which it was allowed to fall into ruin. The grassy mount and the curtain walls punctuated by tall towers are the most prominent features of this royal fortress. The mound was raised by William the Conqueror, and the stonework added for Henry III as a necessary defence against the Scots. The last additions to the defences of the castle were the outer entrance, curtain wall and three towers, built on the orders of Edward II.
Another forested road takes you back across the moor to Beggar's Bridge at Glaisdale.
There's a well-known local tale of romance attached to Beggar's Bridge in Glaisdale. An inscription on the bridge suggests that it was built in 1619, and the initials TF refer to Thomas Ferries, the son of a moorland farmer. When he was courting he had to ford the Esk to meet his young lady, Agnes, whose father considered Thomas too poor for his daughter. Thomas resolved to seek his fortune at sea but, with the river in flood, was unable to cross to kiss his sweetheart goodbye. Returning later, a wealthy man, Thomas married Agnes and built a handsome bridge on the very spot.
If you want to learn more about the history of the North York Moors, there's no better place than the Ryedale Folk Museum. A unique visitor attraction located in the picturesque village of Hutton le Hole, where the history of Ryedale and the North York Moors – from the Iron Age to the 1950s - is brought to life through the Museum’s buildings and collections.
From here the route heads north again up onto the moor for a lunch stop at Blakey Ridge, to be more precise The Lion Inn.
The Lion Inn on remote Blakey Ridge is a 16th Century freehouse owned and run by the Crossland family since 1980. Located at the highest point of the North York Moors National Park, it stands at an elevation of 1,325 feet offering breathtaking views over the valleys of Rosedale and Farndale.
The northern half of the North York Moors offers a scintillating mix of heather moorland and forestry, broken up by quiet lanes that weave their way between tiny villages. It’s a great place to ride.
The small hamlet of Commondale marks the start of the return leg back to Scarborough as you skirt the southern side of Kildale Moor.
You join the B1257 that picks up and follows the course of the River Seph from Chop Gate through Bilsdale with high moorland to both sides. The landscape starts off with rich pastures and slowly changes to arable as you head south to Helmsley.
If you were asked to imagine the perfect English market town, then it would probably look a lot like Helmsley! There's the bustling market square, the dramatic castle ruins and the charming tea rooms, a great place to stop for refreshments before joining the A170 back to Scarborough.
Enjoy. 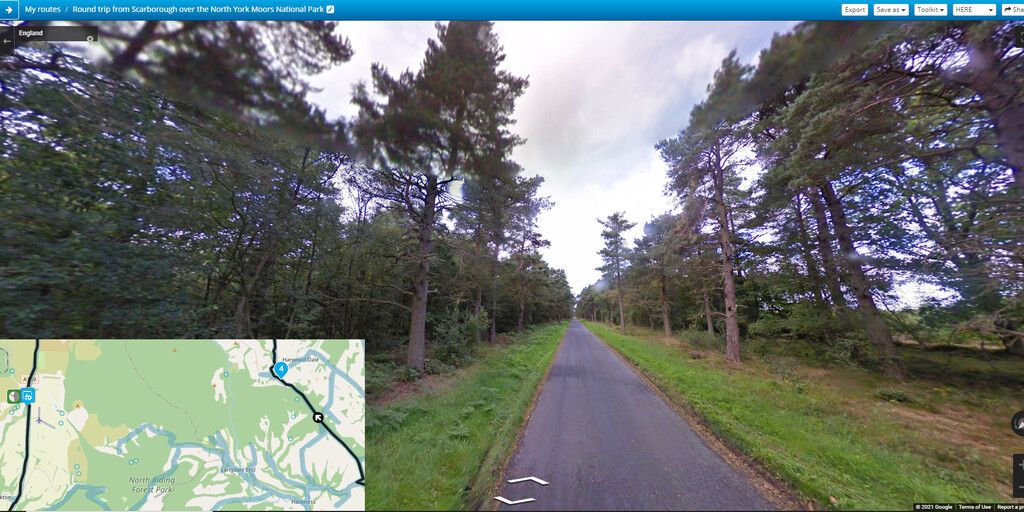 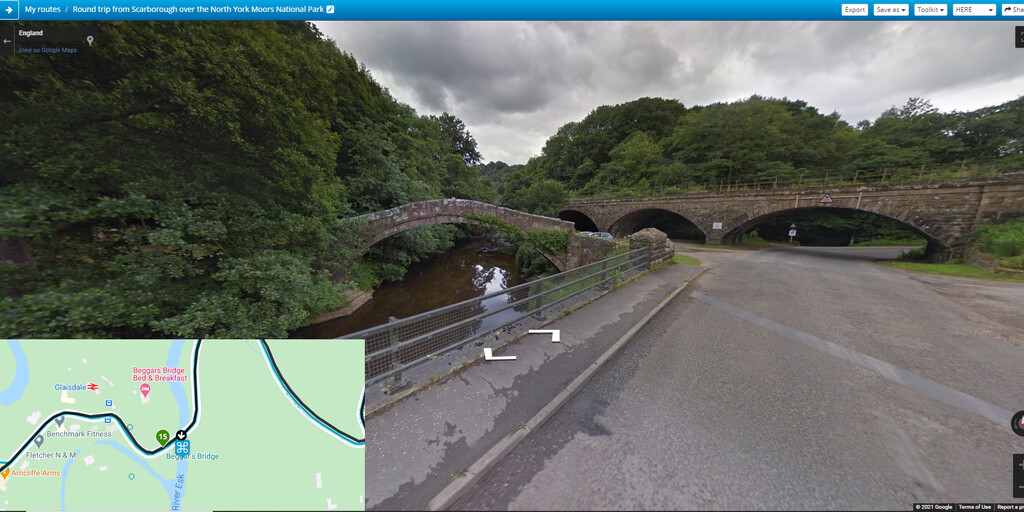 Yorkshire and the Humber
The images and text displayed here originate from the Wikipedia article "Yorkshire and the Humber", which is released under the Creative Commons Attribution-Share-Alike License 3.0.
About this region
Yorkshire and the Humber is one of nine official regions of England at the first level of ITL for statistical purposes. The population in 2011 was 5,284,000 with its largest settlements being Leeds, Sheffield, Bradford, Hull, and York. It is subdivided into East Riding of Yorkshire, North Yorkshire (excluding areas in Tees Valley of North East England), South Yorkshire, West Yorkshire, North Lincolnshire and North East Lincolnshire. The committees for the region ceased to exist after the 12 April 2010; regional ministers were not reappointed by the incoming Coalition Government with associated the Government Offices abolished in 2011.

8667
Amount of visits (Yorkshire and the Humber)

16
Amount of routes verified by RouteXperts (Yorkshire and the Humber)

428
Amount of downloaded routes (Yorkshire and the Humber)

57.24
Hours
View route collection A collection of routes covering East England including Hull Scarborough Newmarket Colchester Orpington and Folkestone
About this route collection
East England has a host of great roads to travel and many historical sites to visit.
The picture above shows the North York Moors National Park in all of it's glory with the heather in full bloom. This collection of routes covers as far north as Lindisfarne and as far south as Folkestone, they all travel through varied landscapes from high moorland to the level fens and everything in between. There is something for everyone in this collection. There is also a mini 2 day tour down the east coast from Hull to the Eurotunnel for those that want to enjoy the journey south before heading into Europe, this of course can be joined from anywhere along the way.
As with all MyRoute-app RouteXpert routes, these have been made equal for MRA Navigation, TomTom and Garmin devices meaning that whatever GPS satnav you use, you and all of your travelling companions are guaranteed to follow these routes precisely. Enjoy.