Countries in this route
Route by Nick Carthew - (MRA Senior)
Route 5 of 11 routes forming a tour down the west coast of Italy to Sicily. All routes link together. The first half of this route uses dual carriageway and autostrada roads to navigate you quickly to and then past Naples. A small toll fee of 2,10 € (2020) is charged for using the A3. Then it's the thrilling zig zag coast road with many hairpin bends, steep drops and beautiful coastal vistas of the Amalfi Coast. In conclusion, driving along the Amalfi Coast road is one of the most thrilling experiences that you can have while visiting Italy. May, September and October see less traffic on the roads and are the best months to fully appreciate the amazing sights. Despite the use of the Autostradas, this route has earned 5***** stars from me because of the thrilling roads and beautiful vistas.
Use route
Share

RP 12. View across the Gulf of Naples towards Mount Vesuvius.
The star attraction of this route is the Amalfi coast on the Sorrento Peninsula, and to reach the peninsula quickly, this route uses the faster Autostrada roads to get you there in about 90 mins. The A3 autostrada has a small toll fee, the cost for a Car/Motorcycle in 2020 is €2,10.
You will pass and it's hard to miss it, the giant volcano Mount Vesuvius. The only active volcano in mainland Europe that has produced some of the continent's largest volcanic eruptions. It sits in the crater of the ancient Somma volcano. Vesuvius is most famous for the 79 AD eruption which destroyed the Roman cities of Pompei and Herculaneum. Though the volcano's last eruption was in 1944, it still represents a great danger to the cities that surround it, especially the busy metropolis of Naples. There is a road to the top for those that are brave enough! And for those that wish to visit the ruined city of Pompei you can leave the autostrada at RP 9, have a look around and then rejoin the route.

Leaving the autostradas behind and on towards the Sorrento Peninsula's north coast that forms the southern boundary of the Gulf of Naples. The coastal views are beautiful and the view across the bay towards Mount Vesuvius is stunning.
Head towards the elegant town of Sorrento. Perched picturesquely on a plateau above the sea with spectacular views over the Gulf of Naples, Sorrento has been a popular tourist destination for almost two centuries. I have suggested a coffee or lunch break in the old harbour, a favourite with the poet Byron and literary geniuses – including Goethe, Dickens and Tolstoy.
From here, the route leaves the north coast, crosses over the mountainous tip of the peninsular and joins the Gulf of Salerno and the Amalfi Coast.
Recognised as a World Heritage Site by UNESCO since 1997, the Amalfi Coast is one of Italy’s (and the world’s) most beautiful coastal landscapes. This thrilling road takes you along a coastline dotted with picturesque Italian villages resting on cliffs that rise out the turquoise sea. There are many viewpoints to stop and take photo's. And then there is Fiordo di Furore at RP 33, a settlement hidden away within a ' fjord'. It's actually not a fjord but a carved out river valley. The stone bridge that allows this route to cross the cutting is used for a round of the World High Diving Championships and is normally held here in July. The picturesque town of Amalfi is next, this was a popular holiday destination in the 20s and 30s for the British upper class and aristocracy.
This text taken from The Lonely Planet:
It is hard to grasp that pretty little Amalfi, with its sun-filled piazzas and small beach, was once a maritime superpower with a population of more than 70,000. For one thing, it’s not a big place – you can easily walk from one end to the other in about 20 minutes. For another, there are very few historical buildings of note. The explanation is chilling: most of the old city, and its inhabitants, simply slid into the sea during an earthquake in 1343.
Just around the headland is neighbouring Atrani, a dense tangle of whitewashed alleys and arches centered on an agreeably lived-in piazza and small scimitar of beach; don’t miss it.
And that is where this route visits next, for a coffee. As you approach, take the small right immediately after the tunnel to visit the lower level and piazza.

The road along the Amalfi Coast is famous for its hairpin bends, zigzags, the views over the sea, and the narrowness in some parts. The road winds along the cliffs, it was built at a very steep angle, so zigzags backwards and forwards. The Amalfi Coast drive is arguably the world's most beautiful and thrilling sightseeing road. It stretches 50 kilometers (30 miles) between Sorrento city and Amalfi village, the community that gave the coast its name. It has only occasional railings to keep your car from potentially plunging into craggy, breaker-washed sea boulders far below. Driving in the direction that this route uses, from west to east means your lane precariously hugs the sea cliff edge.
It’s a trip that has to be made at least once in your life! The surface of the road is asphalted. The coast is one of the most fascinating in the world for its landscape where every corner seems to reveal an even more stunning view.
The Route passes through several villages that all have historic defensive towers that adds to their beauty. And at RP 41 as you reach Salerno you will see the Ceramica Artistica Solimene, a vast factory outlet, which looks like something Gaudí might have built, it is the most famous ceramics shop in town. It sells everything from egg cups to ornamental mermaids. Even if you don’t go in, it’s worth having a look at the shop’s extraordinary glass-and-ceramic facade.
The route ends at the southern outskirts of Salerno at a Novotel hotel. 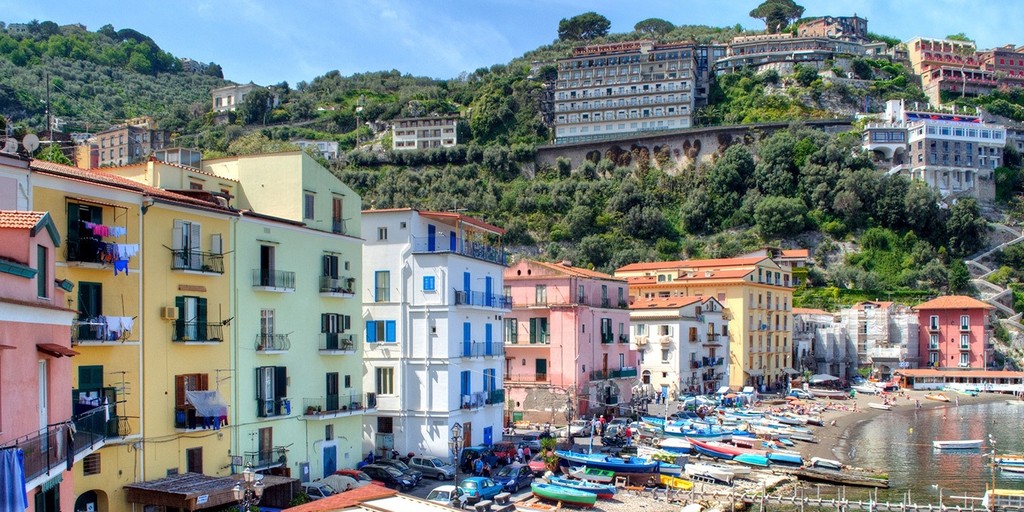 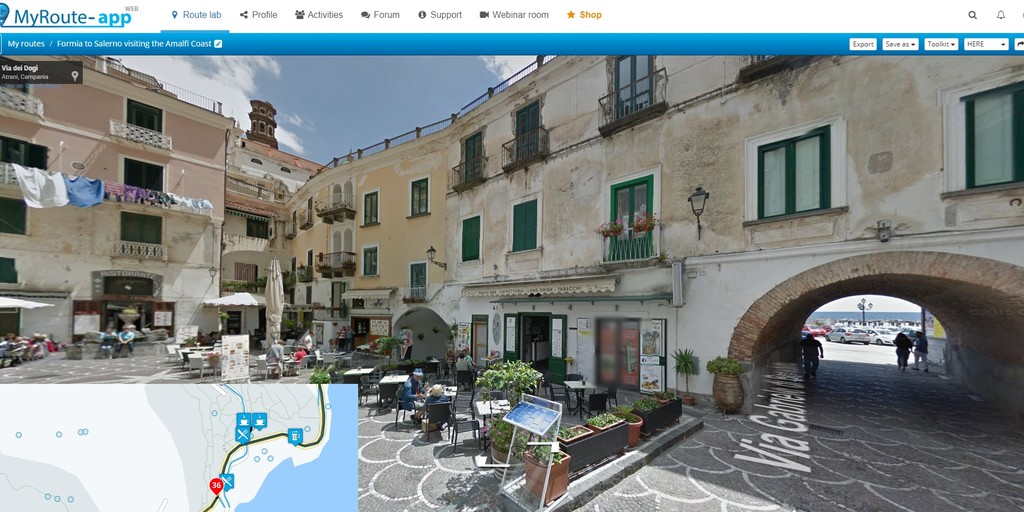