Countries in this route
Route by Nick Carthew - (MRA Senior)
Route 9 of 11 routes forming a tour down the west coast of Italy to Sicily. All routes link together. A route south through the The Madonie Regional Natural Park on very twisty but generally good roads. It continues through south through Sicily's wild and empty interior, a beautiful, uncompromising land; a timeless landscape of silent, sunburnt peaks, grey stone villages and forgotten valleys. Traditions live on and life is lived at a gentle, rural pace.
Use route
Share

Valley of the Temples.
This route Leaves the north coast and head south climbing into the Madonie mountains in the Madonie Regional Natural Park. The park covers some 35,000 hectares and is generally mountainous – there are 6 mountains over 1,500m and several others well over 1,000m. The highest, Pizzo Carbonara is 1,979m, second in Sicily only to the mighty Etna (3,323m). As a result, in winter the park is home to three ski pistes.
Land over 1,500m is dominated by the Madonie Forest while lower down the slopes, the locals continue to pursue millennial agricultural activities including sheep and cattle farming and the cultivation of wheat, olives and fruit.

If you are looking for a slightly alternative Sicily, one that does not really exist in the popular imagination, then Sicily's central interior will offer a great deal for contemplation thanks to its landscapes, its people and their way of life that has relatively little in common with that of coastal city-dwelling Sicilians.
For centuries the area was divided into large latifondi (landed estates) owned by absentee landlords, and still today the area seems remote and largely cut off from the rest of the world. The vast interior that makes up central Sicily is mostly deplete of tourism with just miles of cornfields and rolling hills, a beautiful picture of rural life on the island.
The roads are incredibly twisty including a series of 9 hairpin bends, adding excitement to an already enjoyable route.
The landscape softens as you travel further south with vineyards adorning the rolling hills. A 30 minute ride on the SS640 takes you to the jewel in the crown of this route, The Valley of the Temples at Agrigento.

A UNESCO World Heritage Site, the Hellenic ruins of the Valley of The Temples stand on a cool and breezy hilltop looking out across the Ionian Sea. Throughout history, Sicily has been subjected to frequent invasion. The Greeks were swiftly followed by the Romans, the Byzantines, and then the Moors, but it’s the Greeks that left these archaeological jewels behind. From the clifftop Temple of Juno to the Garden of Kolymbetra, Agrigento’s temple complex is one of the best-preserved archaeological sites of the ancient world. Once you glimpse the famous Doric temples, bathed in the Sicilian sun and surrounded by ancient, gnarled olive trees, it’s easy to understand why this site is arguably the most significant Greek ruin outside of Greece.
Akragas was founded in 582 BC and would have been, at its peak, one of the most imposing settlements in the Mediterranean. Positioned between the rivers Akragas and Hypsas, the city covered the site where modern day Agrigento stands today, as well as the lower terrain where the Valley of the Temples is found.
Today, the 1300-hectare Valley houses the extraordinarily well-preserved temples, which offer a fascinating insight into the lifestyle and culture of the founding Hellenic civilization and subsequent Roman conquerors.

The huge site is divided into 2 zones, eastern and western. This route takes you to the entrance to the eastern zone. In this zone, you will find the three most complete and well-preserved ruins - they’re sort of the superstars of the park.
This includes the 6th century Temple of Hercules / Heracles (the oldest temple in Agrigento) and the stunning Temple of Concordia (one of the best preserved) Doric temples in existence in the world). There’s also a cafe and free public toilets.
This entrance is just outside the Temple of Juno which can be clearly seen as can the Tempio di Giunone high on the hill as you approach the entrance.
The park is open every day from 8.30 am - 7 pm. During summer high season (usually mid-July to mid-September), the hours extend to 11 pm during the week, and until midnight on Saturdays, Sundays, and holidays. The ticket office closes one hour before closing time and the price for an adult is €12.

The route ends at a small B&B in Agrigento above a motorcycle/scooter shop with private parking, just 2 km away.
The beautiful landscapes, twisty roads and world class attraction earns this route 5***** stars. 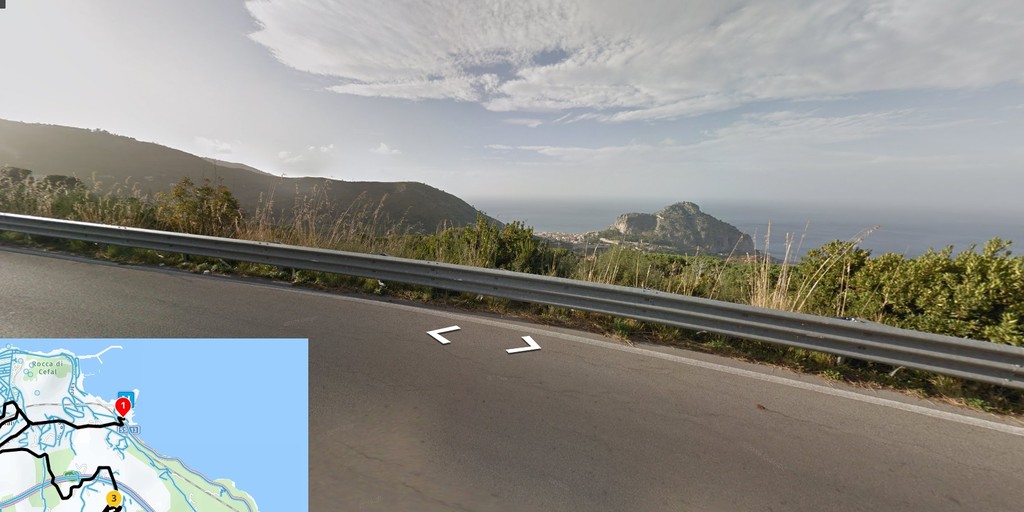 Looking back towards La Rocca di Cefalù from RP 3. 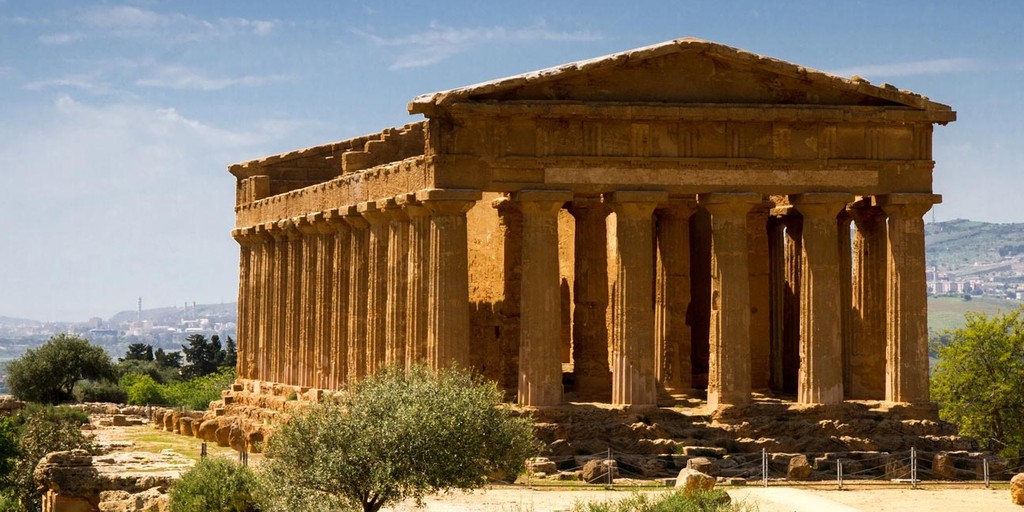 Sicilie
The images and text displayed here originate from the Wikipedia article "Sicilie", which is released under the Creative Commons Attribution-Share-Alike License 3.0.
About this region
The Kingdom of the Two Sicilies (Neapolitan: Regno d’ ’e Ddoje Sicilie; Sicilian: Regnu dî Dui Sicili; Italian: Regno delle Due Sicilie; Spanish: Reino de las Dos Sicilias) was a kingdom located in Southern Italy from 1816 to 1860. The kingdom was the largest sovereign state by population and size in Italy prior to Italian unification, comprising Sicily and all of the peninsula of Italy south of the Papal States, covering most of the area of today's Mezzogiorno. The kingdom was formed when the Kingdom of Sicily merged with the Kingdom of Naples, which was officially also known as the Kingdom of Sicily. Since both kingdoms were named Sicily, they were collectively known as the "Two Sicilies" (Utraque Sicilia, literally "both Sicilies"), and the unified kingdom adopted this name. The King of the Two Sicilies was overthrown by Giuseppe Garibaldi in 1860, after which the people supposedly voted in a plebiscite to join the Savoyard Kingdom of Sardinia. The annexation of the Kingdom of the Two Sicilies completed the first phase of Italian unification, and the new Kingdom of Italy was proclaimed in 1861. The Two Sicilies were heavily agricultural, like the other Italian states.