Marmolada Gletscher
Today is clear weather. We do not only want to ride motorcycles but also benefit from visiting the Marmolada Glacier with this clear weather.
Via the Campolongo and the 33 hairpin bends of the Pordoi we drive towards Pozza di Fassa. We still take the Passo Di San Pellegrino and tour towards Alléghe. This is how we reach the Malga Ciapela Seilbahn. We leave the engines on the large parking lot and go up the cable car.

With the Punta Penia (3343 m) the Marmolada is the highest mountain group of the Dolomites, a worldwide unique massif between Veneto and Trento, declared a UNESCO World Heritage Site in 2009. http://www.museomarmoladagrandeguerra.com/de/die-marmolata / die-marmolata-und-die-seilbahn /
The cable car Marmolada consists of 3 parts. From the base station of Malga Ciapèla (1,450 m) the first cable car takes you to Banc d'Antermoja (2,350 m), the second to Serauta (2,950 m). During the First World War the Marmolada Glacier played an important and strategic role. All explanations about this and a final tribute to the fallen soldiers can be found here in the museum. The 3rd lift will eventually take you to Punta Rocca (3,265 m) with panoramic terrace, mountain restaurant and a mountain chapel carved into the rocks in honor of the fallen soldiers.
The station is on the other side of Punta Penia (3343 m), the highest mountain in the Dolomites.
Enjoy the beautiful panoramic view of 360 ° with your feet in the snow, in the beautiful landscape of the Marmolada overlooking the beautiful Dolomite peaks.
After all this beauty we continue towards Fedaia, which we had just seen as a small blue dot. Via the Sella and Passo Gardena we return to the hotel.

This was a spectacular day. You must have very clear weather to visit the glacier, otherwise it is a waste of your money if you see nothing through the clouds and fog. 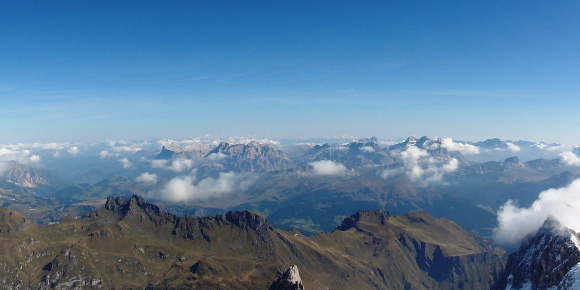 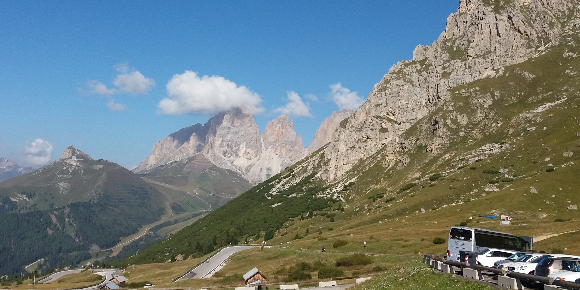 Trentino Zuid Tirol
The images and text displayed here originate from the Wikipedia article "Trentino Zuid Tirol", which is released under the Creative Commons Attribution-Share-Alike License 3.0.
About this region
The Indo-European languages include some 449 (SIL estimate, 2018 edition) languages and dialects spoken by about or more than 3.5 billion people (roughly half of the world population). Most of the major languages belonging to language branches and groups of Europe, and Western and southern Asia, belong to the Indo-European language family. Therefore, Indo-European is the biggest language family in the world by number of mother tongue speakers (but not by number of languages in which it is the 3rd or 5th biggest). Eight of the top ten biggest languages, by number of native speakers, are Indo-European. One of these languages, English, is the De facto World Lingua Franca with an estimate of over one billion second language speakers. Each subfamily or linguistic branch in this list contains many subgroups and individual languages. Indo-European language family has 10 known branches or subfamilies, of which eight are living and two are extinct. The relation of Indo-European branches, how they are related to one another and branched from the ancestral proto-language is a matter of further research and not yet well known. There are some individual Indo-European languages that are unclassified within the language family, they are not yet classified in a branch and could be members of their own branch. The 449 Indo-European languages identified in the SIL estimate, 2018 edition, are mostly living languages, however, if all the known extinct Indo-European languages are added, they number more than 800. This list includes all known Indo-European languages, living and extinct. A distinction between a language and a dialect is not clear-cut and simple because there is, in many cases, several dialect continuums, transitional dialects and languages and also because there is no consensual standard to what amount of vocabulary, grammar, pronunciation and prosody differences there is a language or there is a dialect (mutual intelligibility can be a standard but there are closely related languages that are also mutual intelligible to some degree, even if it is an asymmetric intelligibility). Because of this, in this list, several dialect groups and some individual dialects of languages are shown (in italics), especially if a language is or was spoken by a large number of people and over a big land area, but also if it has or had divergent dialects. The ancestral population and language, Proto-Indo-Europeans that spoke Proto-Indo-European, estimated to have lived about 4500 BCE (6500 BP), at some time in the past, starting about 4000 BCE (6000 BP) expanded through migration and cultural influence. This started a complex process of population blend or population replacement, acculturation and language change of peoples in many regions of western and southern Eurasia. This process gave origin to many languages and branches of this language family. At the end of the second millennium BC Indo-European speakers were many millions and lived in a vast geographical area in most of western and southern Eurasia (including western Central Asia). In the following two millennia the number of speakers of Indo-European languages increased even further. By geographical area, Indo-European languages remained spoken in big land areas, although most of western Central Asia and Asia Minor was lost to another language family (mainly Turkic) due to Turkic expansion, conquests and settlement (after the middle of the first millennium AD and the beginning and middle of the second millennium AD respectively) and also to Mongol invasions and conquests (that changed Central Asia ethnolinguistic composition). Another land area lost to non-Indo-European languages was today's Hungary due to Magyar/Hungarian (Uralic language speakers) conquest and settlement. However, in the second half of the second millennium AD, Indo-European languages expanded their territories to North Asia (Siberia), through Russian expansion, and North America, South America, Australia and New Zealand as the result of the age of European discoveries and European conquests through the expansions of the Portuguese, Spanish, French, English and the Dutch (these peoples had the biggest continental or maritime empires in the world and their countries were major powers). The contact between different peoples and languages, especially as a result of European colonization, also gave origin to the many pidgins, creoles and mixed languages that are mainly based in Indo-European languages (many of which are spoken in island groups and coastal regions).

Enjoy the beautiful routes in the Marmolada area. Whichever way you head in the Dolomites, it is always incredibly beautiful. You get one (toll free) pass after the other for your wheels and it is pure enjoyment every time. A delightful playground that, depending on the hour, depending on the direction, depending on the weather, always looks different and enchants you completely!

The routes have been checked and made equal for Garmin, TomTom and MyRoute-app Navigation users. Do you have a fantastic route in the Dolomites that belongs to this list? Then send us the route via routexpert@myrouteapp.com.