Countries in this route
Route by Leonor Orban - RouteXpert
Published: 02/03/2020
This is a beautiful day route from Komárno (Slovakia) to Szentendre (Hungary).

Along the way you will drive through a number of rolling nature reserves to the south of the Danube bend. The roads wind through the woods, after which you continue along the banks of the Danube.
Along the Danube bend you will pass through Esztergom and Visegrád. Every city has its own atmosphere and special cultural places to visit; always with an impressive view of the Danube.

As icing on the cake you end up in Szentendre. This artists' village has a wonderful, almost Mediterranean, atmosphere. It is the perfect place to end the route at the end of the day on a terrace while enjoying a snack and a drink.

Dobogókő viewpoint (RP13)
"NEC ARTE, NEC MARTE", ("neither by violence nor by tricks"). Today your starting point is Komárno: a symbolic place for Central Europe.

The route follows the Danube past a number of Hungarian cities. The day offers a nice change between nature and culture. One moment you drive over the hills through beautiful forest areas. Not much later you drive into a city where you can visit a number of cultural sites. These towns also offer you an excellent opportunity to get a taste of local culture and taste various Hungarian dishes. Because the route is so varied, the roads are of good quality, and there is plenty to see and do along the way, this route gets 4.5 stars from me.

But before you get on the motorcycle, you have the opportunity to visit a number of fortifications in Komárno and Komárom. In the 400 years that the Roman Empire existed, the Pannonian Limes or (Danube Limes) was a heavily fortified border that ran from Klosterneuburg (Austria) to Belgrade (Serbia). Due to the strategic location of Komárno / Komárom (on the Danube and Váh River) fortifications were built here to defend the border.

The strategic location of Komárno / Komárom has also been recognized in more recent history. Fortifications were expanded to be able to resist the Ottoman Empire, among others. Over the centuries, invaders have always been successfully stopped: no party has succeeded in seizing the fortifications. That is why the city proudly bears the title "nec arte, nec marte" and serves as a symbol for the resilience and pride of Central Europe.

You must have noticed that these two cities are very similar. Several times in history, Komárno and Komárom have been both 1 large city and 2 smaller cities, each on their side of the Danube. Nowadays they are again two cities in two different countries, but the population is mixed: in the Slovak part, for example, more than 60% are Hungarian.

As soon as you start the route, you will soon pass the border when you cross the Danube via the Elisabeth bridge (RP2). This river is the border with Slovakia and is always the marker for a cultural hotspot: Esztergom, Visegrád and Szentendre are situated at the foot of the Danube.

After crossing the border, you can refuel in Komárom before you start the route (RP3).

The first 30 kilometers you follow the Danube. This is the second longest river in Europe (after the Volga). The river originates in the Black Forest in Germany and ends after about 2800 km in the Black Sea, on the border between Romania and Ukraine. The Danube has played an important role in the history of Europe. It formed a natural border during the Roman Empire, served as a supply route and was a good migration route for the Asian shepherd people, the Magyars, who eventually settled in Hungary.

At Süttő you leave the Danube to enter the Gerecsei Nature Park. Slowly the road winds through a number of hills up to a height of approximately 300 meters. Eventually the route bends back to the Northeast and the Danube slowly appears again and you enter Esztergom. Before you visit the center, continue to the "Vaskapu" (Iron Gate). On top of this hill (404m high) is a restaurant with a terrace (RP8) that offers a beautiful view of the Danube. You can park your motorcycle here and have a quiet lunch before you enter the tourist bustle of the city of Esztergom (RP9).

Esztergom was the capital of Hungary from the 10th to the 13th centuries. Nowadays the city houses the seat of the Roman Catholic Church in Hungary and you will find here the largest basilica in Hungary. The Basilica is also visited by the Hungarians, partly because Archbishop Mindszenty is buried here. He is famous and loved by the Hungarians for his resistance to the suppression of Nazism and communism.
At the foot of the mountain, around the basilica, you will find the ancient remains of the castle of Esztergom. You can wander through the narrow alleys and stairs and occasionally admire the view of the Danube.

If you don't have the time (or desire) to explore the city of Esztergom, you can park at RP10 to the left of the road. From here you can climb the Mária Valéria bridge and take a picture of the basilica and the castle.

From Esztergom you leave the Danube for a moment and you enter the Pilis hills. The road climbs to a height of 620m (Két-bükkfa-nyereg). At the dobogókő (or Kloppende Steen) you can briefly stop to take a nice picture of the Pilis hills with the Danube in the distance (RP11).

The route continues its way through the hills to the East. Eventually you will arrive in Szentendre. If it is late in the day, you can skip the last loop of the route and continue straight to the hotel. But if you have time left, I recommend you continue the route to Visegrád.

Visegrád was the seat for several Hungarian kings during the Middle Ages. The palace of King Mátyas (Matthias Corvinus), one of the most important rulers of Hungary, has been completely restored and is open to visitors. If you want to visit the palace, follow the route instructions at RP16. The route itself continues to the Citadel on top of the mountain. Here you have a spectacular view of the Danube bend. It is certainly worthwhile to visit the citadel, but it is especially worth it because of the views. At the citadel is also a small restaurant where you can take a break before you start the last part of the route (RP17).

When leaving Visegrád you will see a ruin along the right side of the road. Ponte Navata was one of the fortifications that were part of the Pannonia or Danubian Limes, of which you have also seen remains in Komárno / Komárom.

The route now follows the Danube bend to Szentendre. Just before you enter the city, you can refuel in Leányfalu (“Girl's Village”). The route ends at Fantázia Lángos Büfé. This bar is located near the banks of the Danube and is part of the atmospheric old center. Szentendre looks almost Mediterranean. You can walk and get lost in the small alleys, looking at the colorful houses and various art galleries.

There are more than enough cozy terraces where you can rest from a beautiful day. On the terrace you can chat about everything you've seen and done, and make plans for the next day. Perhaps a visit to Budapest? The capital is almost "around the corner" from here.

If you are hungry, try a delicious Lángos at Fantázia. This fried bread is sometimes called Hungarian pizza and is especially tasty with a generous dose of fresh garlic and cream. Enjoy your meal! 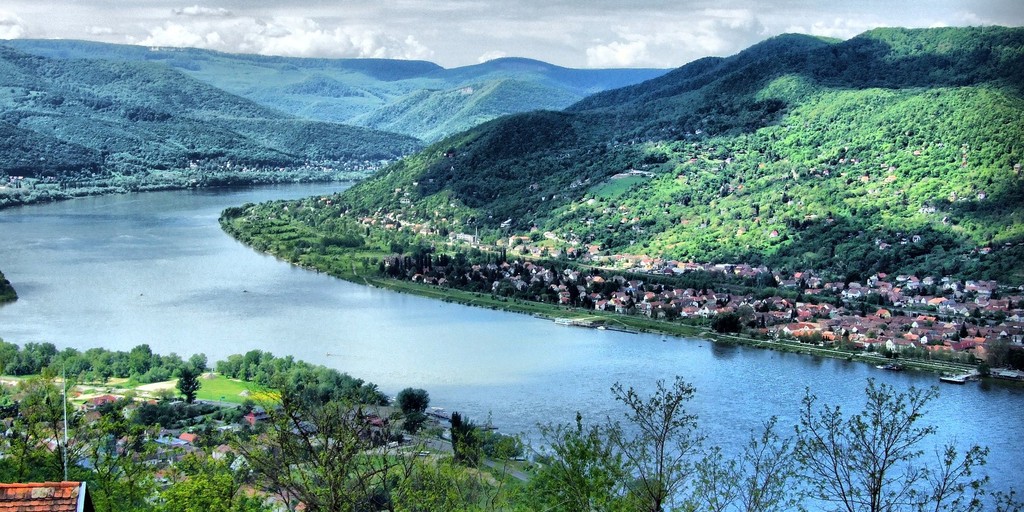 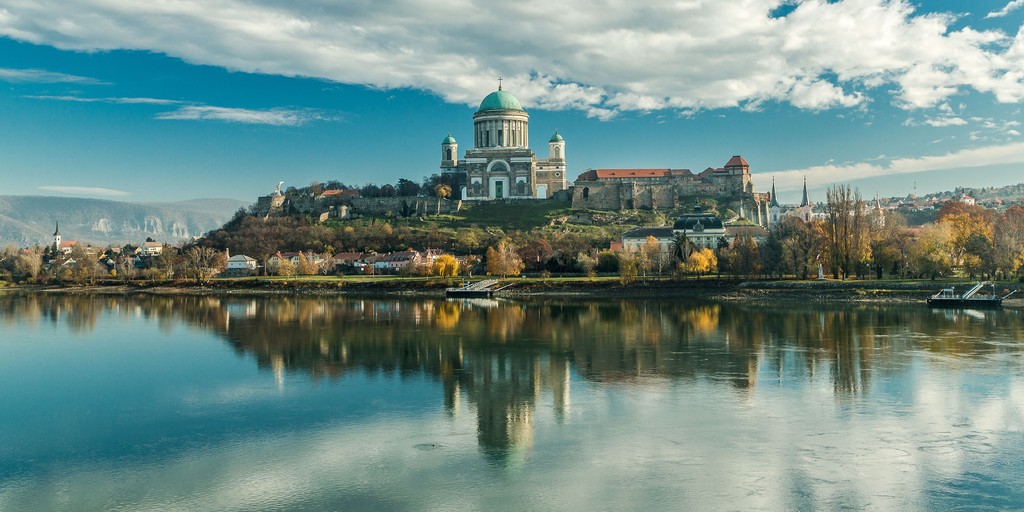 Nitra
The images and text displayed here originate from the Wikipedia article "Nitra", which is released under the Creative Commons Attribution-Share-Alike License 3.0.
About this region
Nitra (Slovak pronunciation: [ˈɲitra] (listen); also known by other alternative names) is a city in western Slovakia, situated at the foot of Zobor Mountain in the valley of the river Nitra. With a population of about 78,353, it is the fifth largest city in Slovakia. Nitra is also one of the oldest cities in Slovakia; it was the political center of the Principality of Nitra. Today, it is a seat of a kraj (Nitra Region), and an okres (Nitra District).