Countries in this route
Route by Nick Carthew - (MRA Senior)
Route 4 of 11 routes forming a tour down the west coast of Italy to Sicily. All routes link together. From a good campsite on the shores of Lake Bracciano, this route travels south of Rome only using a short section of Rome's ring road motorway. The route uses mainly smaller, twisty roads through hills and mountains with a few hairpin bends and lots of good views as it travels down the leg of Italy.
Use route
Share

Bracciano Castle. RP 2.
This route starts from a campsite that is well placed for exploring the area, there are cabins available for those that don't like canvas! The coast is just 30 minutes away or you can reach the Colosseum in Rome in a little over 1 hour.
Bracciano Castle is seen at RP 2, this was built in the 15th century and is one of the largest and best-maintained castles in Italy.
Leaving the lake behind and on a tree lined avenue, the route passes fertile fields growing wheat and barley as you drive through the beautiful countryside on generally quiet roads. The landscape changes to more urban as you approach Rome's ring road. The GRA or Grande Raccordo Anulare (Great Ring Junction). The official number among the Italian motorways is A90, but it is widely known by Romans as 'Il Raccordo' -The Junction!
This route only uses 13 kms of The Junction's 68.2 kms and is soon exiting it and travelling to another lake. Like Lake Bracciano, Lake Albano is a volcanic crater lake and despite it being considerably smaller in size, it is the deepest lake in this region of Lazio with a depth of about 170 m. There are great views of the lake from RP 11 and for anyone interested in Roman history, you can turn right here to visit the town of Albano Laziale which has many sites. The route takes the high road to round the lake and at RP 12 on the opposite side, there is another great view and you can have a coffee too. You are in the Regional Park of the Castelli Romani. In the past the Castelli Romani was a favorite resort for Rome's noble families as well as for Popes. Castelli Romani translates literally as 'Roman Castles', but in fact the name refers to a collection of wine-producing hill-towns. These small towns and villages are scattered over the wooded slopes of the Alban Hills (Colli Albani), a landscape created by long-ago volcanic activity. The circular craters of Lake Nemi and Lake Albano, are testament to the area's geological past, and are among the most attractive natural features of the Lazio region.
On leaving the park, at RP 13 you will get a view of the Lepini mountains 20 kms away and where this route is heading towards. There are olive plantations each side of the road as you get nearer to the mountains. The Lepini range is not large by any standard but they do dominate this area. You will have a view of the second highest peak Monte Lupone at RP 15 and then travel through the ancient and tiny streets of Cori. The road surface is cobble stones as you rise up the hill, and the scenery is straight out of an old black and white movie. The narrow streets complete with washing hanging out to dry just adds to the atmosphere. Passing under an ancient arch and crossing a small bridge indicates that you have left the village.
The route then runs around the edge of the Lepinis, always on higher ground that offers enormous views across the fertile plain and always twisting and turning. The village of Norma RP 18 has developed on a south facing escarpment giving it's residents enviable views towards the coast some 25 kms away, the 6 hairpin road leading out of the village is a good place for some photo's. At RP 19 you can turn right to visit the beautiful Garden of Ninfa. The garden was created among the ruins of the medieval town of Ninfa in the Pontine Marshes and has been classified by the New York Times as one of the most beautiful and romantic gardens in the world.
There is a brief glimpse of the highest of the Lepini peaks at RP 20, Monte Semprevisa 1539 m, it is brief, don't miss it!
RP 25 is another coffee break at the De Santis Cafe in the hamlet of Madonna del Piano, the ancient hilltop village of Castro dei Volsci overlooks the cafe from it's dominant position sat upon the top of a volcanic cone.
Carrying on along delightfully twisty road that sometimes follows the contours of valleys and sometimes taking a more dramatic route around the Auruncis Mountains, you will reach the small costal city of Formia in the heart of the Gulf of Gaeta. The route ends at the campsite of Camping Gianola but there are many other accommodation options available, like the Albergo Little Garden, Hotel.

I have awarded 4**** stars for this route as the roads, scenery and attractions are all very good. 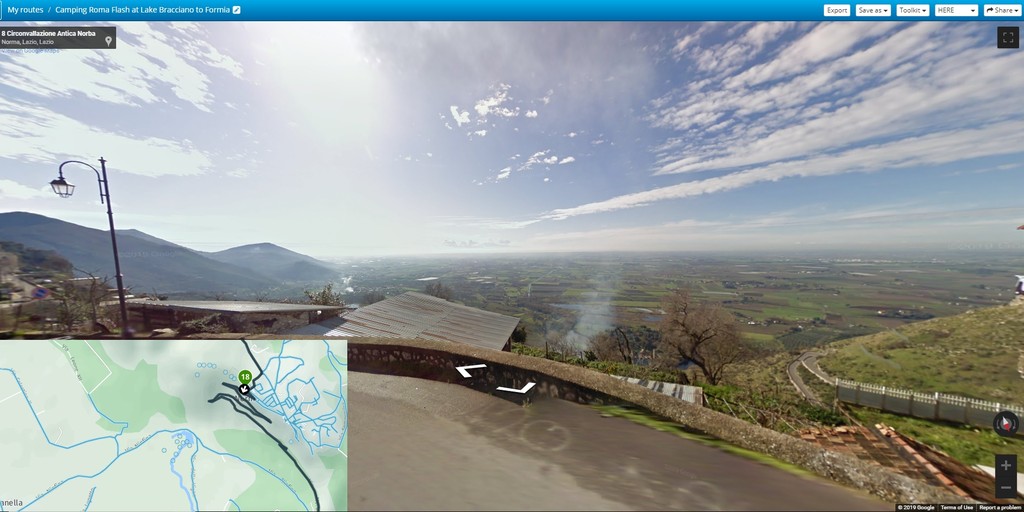 RP 18. View across the plain from Norma. 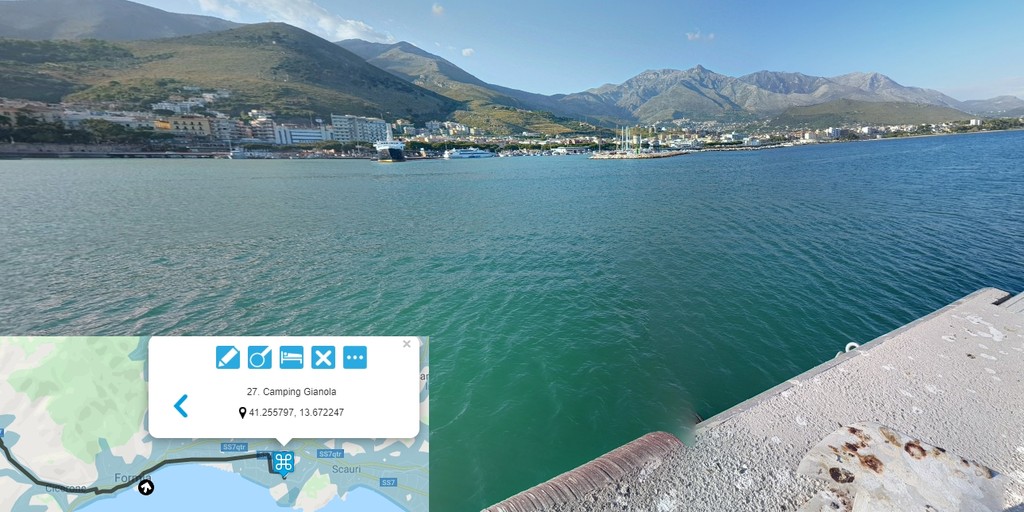