08 Messina to Cefalu via Mount Etna

Route Summary
Route 8 of 11 routes forming a tour down the west coast of Italy to Sicily. All routes link together.

A scenic route from the ferry port of Messina visiting Europe's most active volcano, Mount Etna and then through the spectacular hilly countryside to the beautiful north coast town of Cefalù. A toll road is used at the start at a cost of: Motorcycle toll 2,60 € in 2019. Stunning coast, mountain and countryside route.

RouteXpert Review
Leave the ferry terminal and head for the A20 toll road to Catania. The main objective of this route is to visit Mt Etna and by using the A20/A18 Autostrada you will be on Europe's most active volcano within 1 hour. The road itself is a pleasure to ride with countless tunnels and underpasses and always with views of the sparkling Ionian Sea to your left, the 2,60 € toll for a motorcycle is worth it (2019). For those of you not intending to ride in the cable car, you will have time to visit the beautiful town of Taormina, exit the Autostarda at RP 4. Spectacularly perched on the side of a mountain, Taormina is one of Sicily's most popular summer destinations, a chic resort town popular with holidaying high-rollers and those wanting a taste of Sicilian dolce vita. Taormina gets extremely busy in July and August.

Climbing into the hills away from the coast you will arrive at the small town of Linguaglossa. It was founded on an ancient lava stream in 1566. The name literally means 'Tongue Tongue'. The arrow straight road out of town gives you your first good view of Etna at RP 11. The route starts to seriously climb now with a series of hairpin bends, each one offering increasingly higher views across the spectacular mountainous landscape. The landscape changes to pine forest the higher you climb and as it begins to level out, there is restaurant for coffee or early lunch at RP 12. Just a couple of kms on from the restaurant and you will see not only another great view of Etna, but you will be on one of her recent lava flows, a stark contrast of barren lava and green trees, some recently consumed by the molten rock. The route is now at about 1600 m, just halfway to the summit but must gently descend across more lava flows and pine forest to around 600 m where it passes through a couple of small towns before climbing again.
The second climb of the day is more thrilling than the first as there is less vegetation on the old lava flow that this route snakes up. Breathtaking views back towards the coast and the occasional glimpse back down onto the zig zag road. At RP 18 you will see the lava cave called Grotta dei Tre Livelli. (don't blink or you'll miss it). It's a 3 level cave (Tre Livelli) that was formed in the 1792/3 eruption and at 1150 m it is the longest lava cave on Etna.
Shortly after the cave you will arrive at Rifugio Sapienza, base camp of Mt Etna at 1900 m. The cable car will take you up to 2500 m in 15 minutes and a return ticket costs 30€ for another 33€ you can then jump onto a 4x4 Jeep that will take you to the edge of the crater at 2900 m. I would allow 3 hours for the complete trip.

For this part of the route alone, I would award the route 5 stars, the scenery/landscape and roads are excellent and what better attraction to see than Europe's most active volcano! The second part of this route just adds to the enjoyment of the first, I wish I could award more stars.

The road snakes its way back down off of the volcano with plenty of places to pull over for photo's. If you need coffee, food or fuel these can all be had at RPs 22 and 23. The route now travels through the heart of Sicily's beautiful hilly countryside, sometimes past olive plantations or citrus trees but always twisting and always with a view of distant hills. The ruins of the 17C Monastero basiliano di San Michele Arcangelo can be seen from RP 28 as you enter the town of Troina. The town has a rich history dating back to 7C BC. The Battle of Troina, part of the Allied invasion of Sicily, code named Operation Husky, was an important battle that took place between 31 July and 6 August 1943 during WW2. The battle focused around the numerous hills and mountains surrounding Troina which the Germans had heavily fortified making the fighting fierce. The next hilltop town along this route is Cerami, this hamlet briefly served as headquarters for the US 1st Infantry Division as it prepared to assault German strong points located north and south of Troina. The town demands commanding views and is easy to understand why the US wanted to use it as a base.
The route continues on twisty rural roads giving you views of Mt Etna along the way none more so better than from RP 31 the top of the Sella del Contrasto climb at 1120m. The route stays at around 1000m as it follows the contours and the line of modern windmills. Glimpses of the Tyrrhenian Sea and and the volcanic archipelago Aeolian Islands can be seen as you near the coast. You also get a great view of the islands and the A20 motorway as it disappears into the hillside through two tunnels at RP 35.
The next section follows the beautiful coast as you head west into the setting sun towards the 4**** Hotel Kalura. There are many other options for accommodation in the area. For a 4**** hotel it isn't overly expensive considering it's stunning location. As you would expect, there is secure parking and fabulous restaurant.
Ferry Information:
The ferry from the mainland leaves from Villa San Giovanni every 40 minutes and takes about 20 minutes to cross to Messina. There is no need to book and 2019 prices for a motorcycle 90 days return ticket was € 22.00 + 6.00. 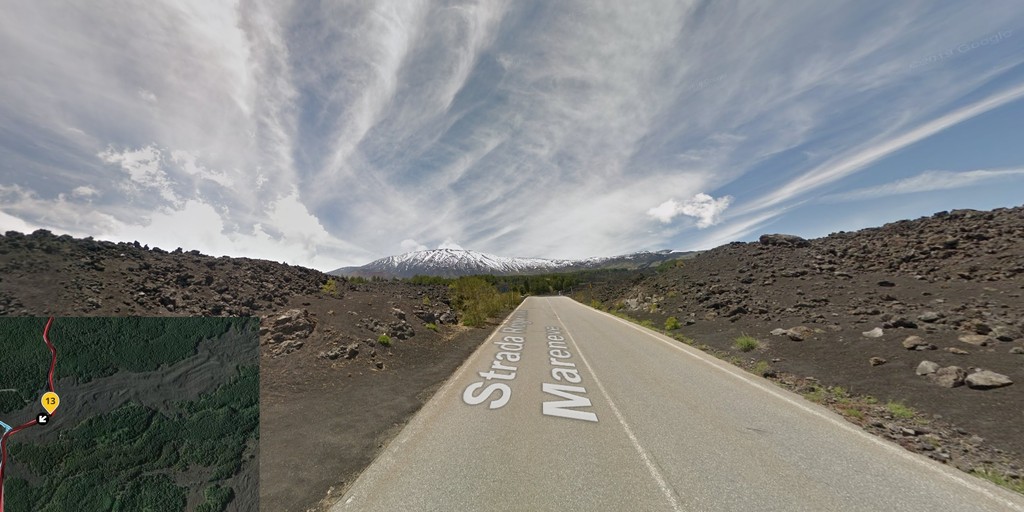 RP 13 View of Etna from a recent lava flow. 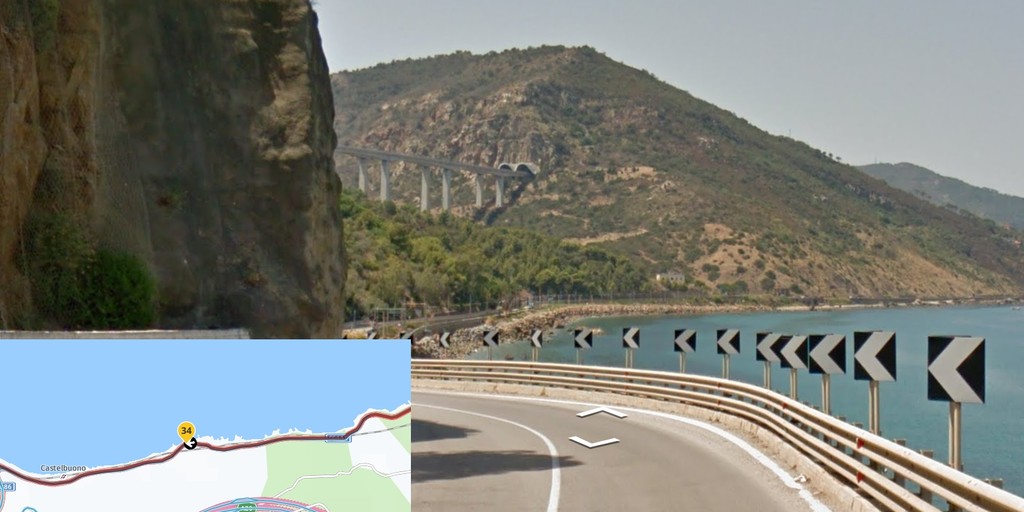 Sicily
About this region
Sicily (Italian: Sicilia [siˈtʃiːlja]; Sicilian: Sicilia [sɪˈʃiːlja]) is the largest island in the Mediterranean Sea and one of the 20 regions of Italy. It is one of the five Italian autonomous regions and is officially referred to as Regione Siciliana. The region has 5 million inhabitants. Its capital city is Palermo.
Sicily is in the central Mediterranean Sea, south of the Italian Peninsula, from which it is separated by the narrow Strait of Messina. Its most prominent landmark is Mount Etna, one of the tallest active volcanoes in Europe, and one of the most active in the world, currently 3,357 m (11,014 ft) high. The island has a typical Mediterranean climate.
The earliest archaeological evidence of human activity on the island dates from as early as 12,000 BC. By around 750 BC, Sicily had three Phoenician and a dozen Greek colonies and it was later the site of the Sicilian Wars and the Punic Wars. After the end of the Roman province of Sicilia with the fall of the Roman Empire in the 5th century AD, Sicily was ruled during the Early Middle Ages by the Vandals, the Ostrogoths, the Byzantine Empire, and the Emirate of Sicily. The Norman conquest of southern Italy led to the creation of the County of Sicily in 1071, that was succeeded by Kingdom of Sicily, a state that existed from 1130 until 1816. Later, it was unified under the House of Bourbon with the Kingdom of Naples as the Kingdom of the Two Sicilies. The island became part of Italy in 1860 following the Expedition of the Thousand, a revolt led by Giuseppe Garibaldi during the Italian unification, and a plebiscite. Sicily was given special status as an autonomous region on 15 May 1946, 18 days before the Italian institutional referendum of 1946.
Sicily has a rich and unique culture, especially with regard to the arts, music, literature, cuisine, and architecture. It is also home to important archaeological and ancient sites, such as the Necropolis of Pantalica, the Valley of the Temples, Erice and Selinunte. Byzantine, Arab, Roman and Norman rule over Sicily has led to a blend of cultural influences.

Route Collections in this region
An epic tour down the west coast of Italy to Sicily
This tour of 11 routes has been designed to take you to many of the well known sites in Italy, it even includes some lesser known sites that I think you'll enjoy too.
When they can, the routes will take you as close as you can get to the sites, like the Leaning Tower of Pisa just 100 m from where you park, or the Ponte Vecchio bridge in Florence where you'll pass right by the end of it and one route takes you as far as you can go up the active volcano Mount Etna.
I said this is a tour of 11 routes and not 11 days because I think you should stop an extra night at one or two places to really enjoy everything that Italy has to offer. For instance; an extra night at La Spezia gives you the opportunity to visit the famous chain of five picturesque seaside fishing villages known as the Cinque Terre. An extra night at the volcanic crater lake - Lake Bracciano, will allow you to take a short train ride into the city Rome to see all of her sights. I'd like an extra night at Salerno to ride the Amalfi Coast road again and another at Cefalu on the island of Sicily to enjoy the spectacular coastline.
What better way to discover amazing Italy than on a road tour? With 80% of world heritage sites, an Italian road tour surely promises an experience worth living!
From a motorcyclist’s point of view, Italy is among the best places in the world to ride. Twisty roads, close distances between sea, hills and mountains – you only need to ride a few miles and the landscape changes completely. Excellent food, good weather and reasonable costs make Italy an attractive touring place for bikers. Reasonably priced hotels and B&Bs have been used with links to these on each route review.